Can African Countries and People Compete in the Global Market? Continued…from pt. 4

The economic advisers of these states were not against the countries succeeding. Rather, the problem was that they were not very familiar with the idea of export-oriented industrialization and would have preferred that the countries stuck to the neo-classical model of development that they are trained to sell. There are two schools of thought as to the reason for the lack of support. The first is that perhaps they have forgotten the formula that their ancestors deployed to achieve world domination. Lists of top 20 exporters in the world include most of the industrialized Western economies that are the most prosperous countries in the world. The foundation of the prosperity was established during the mercantile era by chartered companies whose export process funneled vast wealth to medieval European Empires of United Kingdom, France, Belgium, Netherlands, Portugal, Iberia, Greece, etc. The Asians have reversed that pattern and used the same (chartered company) mercantile principles in the modern era to create the successful Asian Tiger economies.

The second and more cynical perspective is that they had seen the success of Japan and wanted to retard the efforts of copycats. Whatever the reason for failing to lend support to the concept of export-oriented industrialization in the beginning, it is a fact that multilateral agencies were surprised by the success of the strategy. While they were expecting the countries to fail and come back to them for assistance, they were instead confronted by a phenomenon of overwhelming success and had no reaction. In fact, they still do not have a (constructive) rational reaction to the phenomenon.

Export-oriented industrialization was a hands-on management of the economy by the policy making and policy executing arms of the countries. Where intervention was necessary, they applied intervention. Some of the interventions included providing special incentives and loan terms for export companies; liberal tariffs for export goods and machinery and restrictive tariffs and disincentives for import-for-consumption goods. One country, South-Korea, took over the entire banking system in order to better coordinate resource flows to the right industrial sector and companies. Together these measures conflicted with the philosophical underpinnings of development economics of the day but were right for the countries. 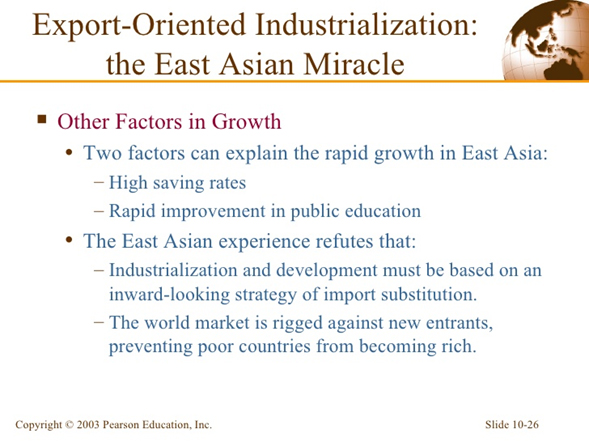 Like the Asian countries, African countries should set their course for development that addresses their present and future needs and wears well for them. It is reasonable to expect African leaders will come to the conclusion that the proper strategy is closer to the Asian model. It worked for the Asians and no evidence has shown that it will not work in African countries. It is currently also working well for Vietnam, which is a growing Tiger and increasingly is becoming a major exporter to African countries. Consider the ramification of the statement. Vietnam was carpet bombed into the dark ages during the Vietnam War by U.S B52s. They began the road back to civilization after the war in the 1980s twenty years after independence of many African nations. In the time since, they have learned how to export and are now major exporters to African countries. The example of Vietnam is why the chorus of voices railing against the ability of African nations to learn to export is wrong headed. The course to journey on is export-led industrialization using a stair-climber approach and process. If Hong Kong, Taiwan, South Korea and now, Vietnam can do it what stops Africans from learning how?

What is a Stir Climber Approach?

Now to the stair-climber approach I described earlier. In my new book, “Unleashed: A New Paradigm of African Trade with the World” I have outlined South Korea’s and Taiwan’s deployment of the stir-climber approach. What the Asian countries realized at the beginning of their journey, was they had to build-up savings from the labor-intensive low-capital industrial phase, by manufacturing such goods as fashion apparel, Hair extensions, fashion accessories, etc. They concentrated resources on exploiting opportunities in the vanity industry because the demand for items in this segment of commerce is huge and measures in the trillions of dollars in Western markets.

The Asians focused on a small number of products and developed industries and marketing to penetrate and capture markets in the West. In other words, in markets that uses hard currency as the medium of exchange. After establishing a position at this basic first stage, they progressed to the next stage. For some of the countries, the next stage was small electrical appliances. These include such products as, microwave ovens, coffee makers, electrical cords, hair dryers, and toasters, etc., to list just a few products in the category. After initial success, the countries began to expand into more competitive fields including home appliances, sophisticated fashion accessories, computer hardware, automotive accessories, etc. It also enabled the countries to map out specific areas of specialization and to invest in heavy industries which laid the basis for the final and ultimate goal of their stair-climber approach. That goal was to compete successfully in high-tech and capital-intensive manufacturing-for-exports arenas such as automobile manufacturing, steel, shipbuilding and many more. The countries have not only achieved it but have excelled.

In due course, agricultural was promoted, and agricultural exports joined the export agenda with great gusto. As we have seen, the stair-climber approach uses success gained from one position to move to the next level. African countries can do the same thing. Countries like Nigeria, Morocco, Algeria, Egypt, South Africa and Ghana as well Kenya, D.R Congo, Sudan, Uganda, Tanzania, and Zimbabwe, etc., will begin to flourish. A description of South Korea’s approach is in the following excerpt. “In July, 1965, 13 items were selected for Export Promotion that were considered to be superior in terms of the effects on the international division of labor, the balance of payments, and employment, as well as having spillover effects on other industries. The 13 items were silk, cotton, china, rubber goods, woolen goods, plywood, clothing, leatherwear, handicraft, miscellaneous goods, radio and electronic devices, fish and shellfish, and canned mushroom industry. For each of these industries a deputy director was tasked with providing financial and technical assistance. The policy proved very effective, producing 13 major export goods and promoting export-oriented industrialization in other industries.” Excerpt is from the book, Korea from Despair to Hope, Kim Chung-yum Chief of Staff of then-President Park Chung Hee.

To execute a stair-climber approach successfully, requires discipline. Everybody in the country has to buy-in and contribute in any capacity that they can to the overarching goal of export competiveness. It is the single most distinctive advantage that the Asians have demonstrated over African people, but it is not because they are necessarily more inclined to a disciplined life. Rather, it is because African people have not had the experience of been placed on “death’s ground.”… To be continued in Part 6 of 8.