How African countries can use “Offset” in domestic procurement

Part of the mission of our newsletter, Unleash Africa, the website, unleashafricantrade.com blog, and the book, “Unleashed: A New paradigm of African Trade with the World,” is to share useful information with readers and, hopefully, leaders and policy-makers of African countries. The intention is to make an impact on several fronts. (1) To stimulate intense dialogue about moving millions of African people from poverty. (2) Ways for African leaders to stretch resources available to them; (3) Propound ideas that open vistas to outside-the-box trade strategies that will contribute to economic emancipation of African countries. (4) Truth-telling, tough-love perspectives about eradicating the all-too-frequent corrosively degenerative selfish acts of anti-social corrupt activity. (5) Cerebration of concepts that address the irrational but widespread fears African opinion leaders have about implementing export-oriented industrialization as the vehicle to drive their countries out of poverty. The focus of this piece is about stretching the resources at the disposal of African countries through a technique of Compensatory Trade, popularly known as Offset arrangement or Offset trade.

Offset arrangement is a perfect win-win proposition for African countries and if it is structured with appropriate input from partners and bidders, it will also be a win-win for the participating bidders. It won’t be easy or without pushback from external and domestic business groups or organizations but the path is one that is defensible, infinitely, and rational. The fundamental rationale for it is that Offset technique is a way for governments of African countries to conserve limited resources.

African countries award contracts in every budget year. In many economies, government contracts are a predictor of near-term economic outlook. Offset transactions allow governments to accomplish two main things. (1) To purchase goods and services under normal tender process. (2) Within a given purchase, the government also creates an investment in its local economy. It does it by including in the clauses of the tender a requirement that the beneficiary of the tender “offset” a pre-agreed percentage of the total purchase by stimulating investment in production in the local economy. It has been widely used in defense procurement. Saudi Arabia has practiced an interesting linkage in its offset deals. Through several large multi-billion dollar defense procurements the Saudis used the offset requirement (in the procurements) to promote investment in the economy of Saudi Arabia. The most prominent of the offset deals is Al Yamama Economic Offset with BAE, the third major offset arrangement entered into by the Saudis. The first two being the Saudi Peace Shield with Boeing and a consortium of U.S contractors and the Al Yawari Program with France.

Definition of a Win-Win deal: A Win-Win Deal is one in which the participants achieve enough of their objectives to be significantly satisfied with the outcome. It doesn’t mean  a beneficial outcome that is symmetrical. It means an outcome that both sides feel achieved the basic aims of entering into the negotiation and eventual agreement. 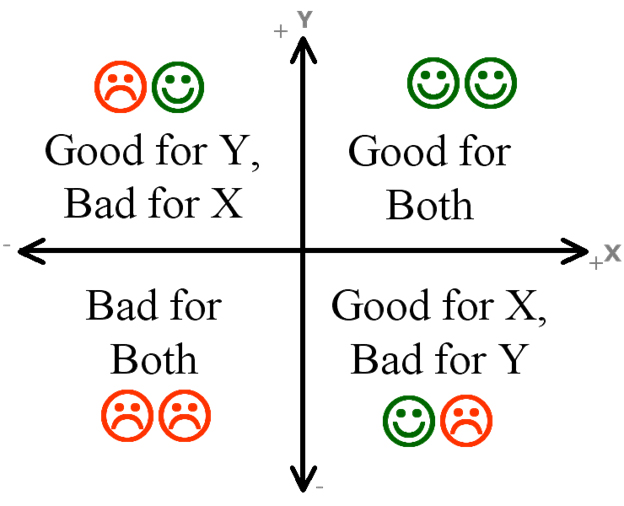 An illustration of typical offset agreement

A Model of Offset Technique. Source: Compensatory Trade Strategy: How to Fund Import and Export Trade when Hard Currency is in Short SupplyThe government awards a contract for building a road, building, industrial plant or stadium (pick your project) valued at $20 million dollars. The contract calls for an offset requirement of 10%. That means the beneficiary of the contract has to create, manufacture, or produce—pick your adjective—business investment to the tune of $2 million dollars in the local economy.

Let’s assume the offset is tied to producing road construction supplies, such as asphalt, aggregates and ready concrete. The beneficiary of the contract is responsible for attracting another business to start producing the item in the local market. The contractor may also invest in the new entity. The offset requirement may be structured to include other priorities and the beneficiary is allowed to select the most optimum option. One such option is creating a manufacturing-for-export industry that will benefit the contractor and other businesses that require hard currency for their operations.

Collaboration and Consultation are the Keys to Success

There is no substitute for diplomatic business interaction in selling offset to potential bidders. Offset requires the eventual winner to do more than the purpose for the bid, for example, to construct a road or power station. The winner has to become an advocate for the country because it will be necessary to convince other business or businesses to take risks by investing millions of dollars in a given country—the awardee of the contract. Invariably, the company has to invest a portion of its profit from the original contract, as a good-faith measure, to convey its belief in the opportunity in order to muster the credibility required to make effective advocacy. Under the circumstances, a country cannot afford to portray an arrogant disposition. Rather the country has to also use salesmanship to create a level of comfortability that will motivate the winner to go the extra mile. In an offset transaction, the party demanding offset must respect the bidder and eventual winner’s profit-motive and ensure that it is preserved.

Governments that decide to use Offset strategy should be well-advised to design an Offset package that is collaborative and solicits input from the businesses that are involved and the business community from which they originate. For instance, if the Offset requirement is an international tender, it would make sense for the embassies in the home countries of bidders to discuss with the main chamber of commerce and provide them with the rationale for seeking offsets so as to not antagonize partner nations. If the Offset requirement is a local tender then the local businesses and organization/s that advocate on their behalf should be consulted. Open consultation elicits collaboration, trust, and respect for all the parties. An arrangement founded on this process will work to the benefit of all concerned and that is to the benefit of the purchaser and the nation.

Offset arrangements is a very prudent way for African countries to conserve resources by enabling their funds to do more than purchase. If a government spends 100 million per year in procurements and gets 10 million dollars in local investments it is a boost to economic activity and jobs. There are many techniques like offset that can induce conservation principles into government expenditure in African countries. It requires governments to want the option. Offset arrangement does not lend itself to kickbacks and other nefarious activities because it poisons the process for the companies involved. It also adds another layer of consideration for a company that is likely to sour them on the bid. For the countries that have a strong ethical tender process, having a significant economic development tool like Offset will be a useful strategy to have in the toolkit.

Global use of Offset
“U.S. government reports show that other countries demand extensive offsets from U.S. companies in the defense industry. As one such report concludes, “For 1993-2006, U.S. companies reported 8,660 offset transactions in 42 countries. The actual value of the offset transactions from 1993 to 2006 was $42 billion,” of which $16.6 billion was direct offsets and $25 billion was indirect (U.S. Department of Commerce 2007b, v, Section 2-5). These figures cover only offsets within the defense industry, not offsets and offset-like activities in commercial industries….”
One country that truly understands the importance of offsets is China. By pitting Boeing and Airbus against one another for sales of aircraft, the country has secured the transfer of technology and production by U.S. and European aerospace companies and taken a great leap forward in developing an aerospace industry of its own. Boeing has signed hundreds of millions of dollars of supplier contracts with China’s aviation industry, while Airbus, in addition to entering into supplier contracts, has announced the establishment of an assembly facility for the Airbus A-320 in China….”

The average offset percentage demanded by the 17 European countries involved in offset activity during the eleven-year reporting period [1993-2003] was 101.2 percent of the export contract values.…The average offset percentages for Europe have exceeded 90 percent in each year since 1999, reaching a peak of 148.8 percent in 2003, up from 94.3 percent in 2002. (U.S. Department of Commerce 2005a, Section 4-3)…http://www.sharedprosperity.org/bp201.html : Offsets and the lack of a comprehensive U.S. policy; What do other countries know that we don’t? by Owen E. Herrnstadt 2008.