A Matrix of Export Opportunities for African Countries

To paraphrase the late Park Chung Hee; South Korea decided on export-oriented industrialization in 1963 because they realized at the time that their domestic market was too small and too poor on which to base the prospects for the nation’s economic survival. Conversely, the world market presented many opportunities for affluent consumers that needed products that South Koreans could make or produce cheaper than the competition. The reason African countries must ditch other ideas for development and instead focus on export-oriented industrialization parallels South Korea’s rationale for doing it in 1963. In fact, many African countries could have made the same choice in the 1960s had African leaders paid more attention to development initiatives in other parts of the world and had the interest of their people been paramount in their minds.

The principal enemy that countries have to rebuke is fear and naysayers. The late Dr. Goh Keng Swee referred to the naysayers in Singapore’s historic quest for a way out of poverty, high unemployment and the threat of imminent absorption by larger neighbors as “denouncing the false prophets.” African countries have many false prophets preaching that Africans lack the skill, wisdom, ideas or creativity to compete in the global market. As a person of African heritage who has advocated for export-oriented industrialization for more than three decades, I find the assertion akin to “cultural” heresy. It is impossible to paint every person of African heritage with the same (one) brush. Africans are already proving that exporting is a business model that can be mastered albeit in small samples. Instead of small samples, African countries should go all in and re-engineer their societies around the strategy. Let the world begin to see made in Kenya, made in Liberia, made in Guinea, made in Namibia, made in Zimbabwe, made in Morocco, made in D.R. Congo, etc., as comfortable tags produced by people and countries that have accepted the mantle of competing their way out of poverty.

1. Conversion Industries: The first and low hanging fruit in the matrix of export opportunities is “conversion” industries. They are a no-brainer for African countries. As the term connotes, these are industries that will convert raw materials that African countries are currently exporting to finished goods in the country and then export the finished goods directly or through marketing companies in their country of origin or in foreign markets. Many projects in this sector can be structured to be self-funding for private and public sector firms with compensatory trade techniques. Designed correctly, many projects in this segment will only require that the owners secure local financing for local inputs on the front end. The hard currency needed to obtain; equipment, expertise, and sundry supplies from overseas sources will be obtained on credit terms guaranteed by the export proceeds for the proposed plant or project. Using a compensatory trade technique referred to as buy-back, debt-payments, i.e., debt service for the credit will be done through exporting the derivatives. Examples include: Conversion of crude oil to gasoline. Conversion of Gold to finished goods; Conversion of timber to plywood furniture and sundry products. Conversion of raw cashew to processed and packed wholesale and retail ready cashews. Conversion of iron ore to steel. Conversion of rubber to tires and sundry products, etc. The opportunities are vast and only require international companies that are willing to take an Africa-centric approach to trade. To advocate on behalf of their African clients in the private or public sector in order to structure transactions that suit the future aspiration of the countries of the continent while maintaining the mandate of a business to operate a profitable and sustainable business model. It is a win-win proposition for the global economy and African countries. It is also deal-making 101. 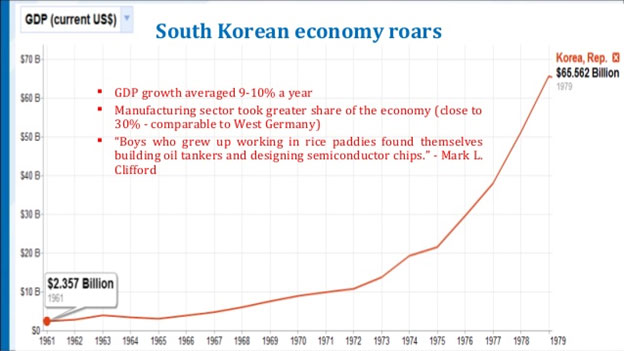 2. Foreign Companies Manufacturing for Export: The second one and just as important as the first, is African countries selling foreign companies on the idea of locating industrial plants for manufacturing and processing in their markets. These are businesses that already have an established market for the products in their home markets and most cases, in markets around the world. The U.S and European countries have a vast array of companies who need low-cost labor and inputs. Obviously, it is not easy to attract them because everyone would like their patronage but African countries need to force their way to the front of the line by making sure companies know they want to do business. It is a no-brainer. Enterprises in the group will create a gale-force of investment interest to the region because they come with accompanying branches of supplier networks and sundry services that want to be near to where they are manufacturing. That will create more opportunities for other industries and ventures. It is the Asian playbook that China and Singapore have used to great effect in crafting their economic resurgence. It will work in African countries if African countries learn to work it.

3. African Companies Manufacturing for Export: The third area is to research areas in hard currency markets in the low-capital intensive, high-labor-intensive sectors that are open to competition. And to develop a plan to introduce products into the sector or sectors using the stair-climber approach. South Korea started with thirteen products under the able shepherding of South Korean Super- minister, Kim Chung-yum. It has taken South Korea from one the poorest countries in the world to one of the wealthiest industrialized nations in the world. It is the path that South Korea, Taiwan, and Hong Kong deployed to great effect. It is also the strategy being prosecuted by Vietnam. 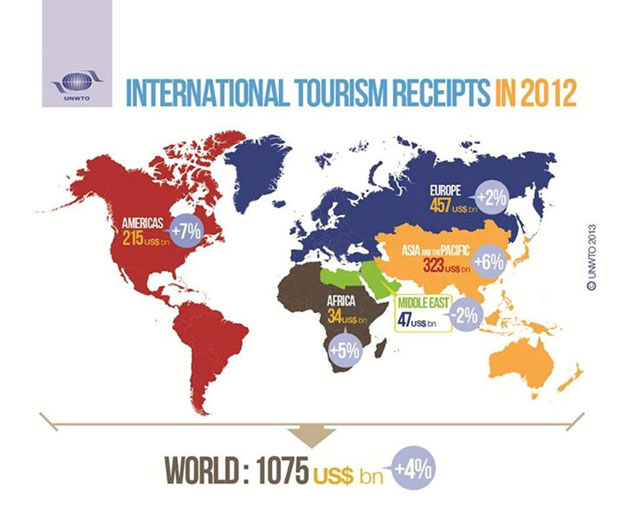 Fig 4 Number of visitors by region

4. Tourism as an Export: Tourism is a tangential but very powerful export industry. In this case, visitors who want to rent a bit of the culture and experience of a country bring the hard currency to the country. It is not part of the three core export-oriented industrialization strategies but is a complimentary aspect of all of them and of the hotel, motel, and restaurant industry. Visitors who visit a country are also very likely to patronize the country’s exports in their home markets.

As figure 3 shows, African countries leave a lot of money on the table when it comes to exploiting tourism. With fifty-five countries possessing 20% of the world’s land area and 20% of the population, African countries earn less from tourism than the Middle-East, an area that is a fraction of the natural resource and size of the African continent. It is an industry that drives foreign revenue inflow to the country and is a huge fountain of economic activity and benefits to the local economy. Visitors patronize many services when they are preparing, traveling to and during their stay in the country. These include travel services, incoming and domestic transport, hotel and motel, food and beverage, souvenirs, to mention a few. Assuming that each tourist visitor spends the equivalent of one thousand (U.S) dollars during their stay in the country. If the country gets one million visitors, it equates to one billion dollars of an economic fountain to the local economy. Some countries can do more and others less, but every country can improve their performance. Using demographic information from the travel habits of international visitors to East Asia, including headcount and projected spending per visitor, Singapore has built a tourism business that contributes thirty-five billion dollars to its GDP. The information provided a rationale for Singapore to make investment decisions in the sector and to incentivize local entrepreneurs also to invest in hospitality ventures that would cater to visitors. Singapore’s Tourism Bureau is one of the most successful government inspired public-private collaboration in the world. Using the same core set of numbers, African countries should study the business opportunity of tourism for their economies and create customized business models that will facilitate investments in the sector by people in the private sector and also enable the government to secure international and domestic loans for building tourism. The debts incurred by the borrowing could be pegged for servicing by the increase in resource flows from investments in the sector.

Industrial exports and tourism are usually labor-intensive industries that absorb a great deal of labor. It follows, therefore, that growth will create jobs. The more significant the increase in economic activity the greater the number of jobs that it will create. It is reasonable to postulate that determined intentionality in all the areas will establish a groundswell of economic activity that African countries can ride to GDP growth that will, in turn, pull millions of people from poverty.