Patriotism and Profit: Creating an Environment for Rising Champion Companies 3

Patriotism and Profit: Creating an Environment for Rising Champion Companies 3

by John I. Akhile Sr.

Contemplating the resources that African countries have frittered away since independence, through the profligacy of leadership, is mind-numbing. The path to evolving a successful economy is not only based on the activities of the business community. It rests more heavily on the activities of the governance apparatus of the country. Certain characteristics underpin successful societies. Two of the most important are: (1) the rule of law; and (2) leadership that is competent and wise. It takes wisdom to know what to do, and unfortunately, the founding fathers of independent African states lacked the wisdom to make the right choices for the economic development of their nations after they gained power. Instead, they were distracted by the trappings of power and their desire for self-enrichment. 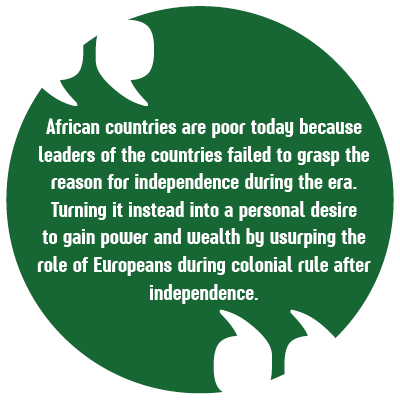 For virtually every country, leadership has to go back to the drawing board and seek to understand the fundament of why their economy is not working for the vast majority of their people. To make tangible progress in the crusade to remove the scourge of poverty in African countries, it is necessary that the nations look in the mirror. Since the leaders are shepherding the nations, they have to look in the mirror. The malady of poverty that has afflicted African countries since independence is one that the leaders first contracted and spread throughout their societies. African countries are poor today because leaders of the countries failed to grasp the reason for independence during the era. Turning it instead into a personal desire to gain power and wealth by usurping the role of Europeans during colonial rule after independence.

Leaders set the tone for rampant conspicuous consumption that plagues the nations of Africa — using the proceeds of ill-gotten gains stolen from their people’s treasury. The root of the ills and sham governance apparatus runs deep into the independence era. In the Fate of Africa by Michael Meredith, he puts it this way: “ The wealth the new elite acquired was ostentatiously displayed in grand houses, luxury cars, and lavish lifestyles—‘platinum life’, it was called in Abidjan. In East Africa, a new tribe appeared, cynically known as WaBenzi, in the description of rich politicians, officials, and businessmen who drove about in very expensive Mercedes-Benz cars….A study of trade figures of fourteen francophone states in 1964 showed that the amount spent on importing alcoholic drinks was six times higher than that spent on importing fertilizer. Half as much was spent on perfume and cosmetic imports than as on machine tools. Almost as went on importing petrol for privately owned cars as on the purchase of tractors and fives times as much on importing cars as on agricultural equipment.”

For African states and people to emancipate economically, the deep roots of malfeasance that has characterized the execution of governance has to be pulled up and shown for what it is. A betrayal of the people of the most egregious kind. Because it is a betrayal perpetrated on the poorest people on earth. It is also a betrayal that causes premature death from a myriad of causes, not the least of which is access to clean pipe-borne water, health facilities, and good nutrition. 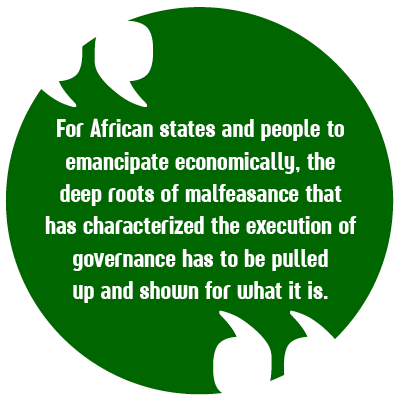 At the center of it all is the ability to set priorities. African countries are consuming societies. They make very little of what they consume. And to complicate matters, they earn money strictly by exporting raw agricultural commodities and natural endowments. In other words, African countries, except for agricultural commodities which they grow, do not do the work from which they derive revenues. The agricultural and mineral commodities that African countries sell to the world are sold as raw materials which are then converted to finished goods in other countries. The importers of the raw materials do the work to convert the products to finished goods which are often exported. The countries where the products are converted to finished goods derive the benefit of employment through industrial jobs the conversion creates and the multiplier effect it has on the economy. In some cases, African markets are the final destination of some of the converted products.

Champion companies can facilitate redressing the challenges, and that is why they are a crucial linchpin in how to evolve prosperous societies. Along the lines of setting proper priorities, African leaders should accept responsibility for where their countries are. Every country has access to the resources needed to create a revolutionary economic transformation. Let’s take the case of Liberia. Liberia has had a very large rubber plantation in their country for almost one hundred years. That’s right. One hundred years. During that time, Liberia has not produced a single tire. Transforming Liberia’s economy requires converting the rubber produced in the plantation to finished goods in Liberia and exporting the finished goods. It will not be an easy process because Liberia will need to renegotiate the terms of the ownership of the plantation with the current owner, Bridgestone Tire Company. However, it is work that needs to be done for the country to have a chance for prosperity.

In Cote D’Ivoire, the export of Cocoa beans is a major source of hard currency revenue. However, the real revenue from Cocoa beans is from the chocolate that is derived from it. Conversion of Cocoa to Chocolate in West Africa is work that should engage West African leaders. D.R Congo is one of the World’s largest producers of Copper. Conversion of Copper to finished goods in D.R Congo should consume the leadership of one of the world’s poorest countries. In every endeavor involving the conversion of raw materials to finished goods, local champion companies can play a huge role 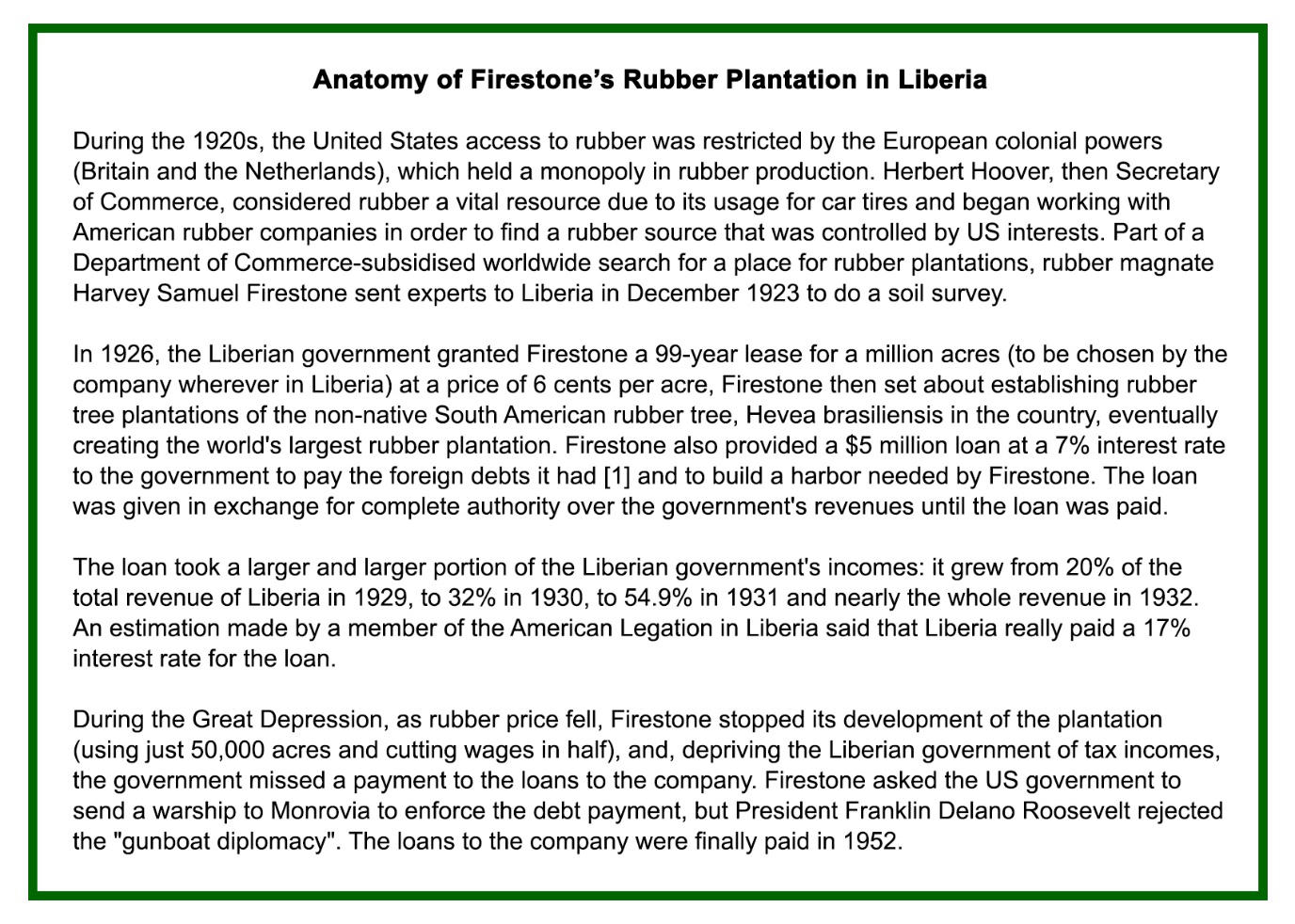 Companies solve supply chain imperatives. They create jobs, and because of the wages they pay to employees, companies are enhancers of the multiplier effect of economic activity. For companies to flourish in any environment, the governance structure of the country has to take proactive action. Every part of the governance structure should be oriented towards making it very easy to start companies so indigenes can get involved. Having a hands-on approach is also important. Interventionist policies of one sort or the other, have been practiced by every industrialized nation. It is, in essence, the reality versus the theory of market-oriented economic policy. When the United States sort to find a source of rubber controlled by a US company, it was interventionism. It led to the creation of Firestone Rubber Plantation in Liberia. Incentivizing businesses and entrepreneurs to invest in specific economic sectors as well as facilitating access to resources for the right companies and entrepreneurs is a proactive initiative of interventionism that will attract the attention of businesses and citizens alike..This article first appeared in the Unleash Africa Newsletter.