Turning African Countries into a Dynamic Jobs Engine for Economic Growth (Part I)
by John I. Akhile Sr.

It is not sufficient to identify the challenges facing African countries. It is more crucial to proffer ideas that embody solutions to the problems identified. Every informed personality agrees with the widely-held belief that African countries have the material and human resources required to succeed. The continent’s socio-economic predicament is akin to what Winston Churchill referred to as “a riddle wrapped in a mystery inside an enigma.” The path to prosperity for every African country is vividly transparent to anyone who is committed to excavating it.

Success is never an accident. It is a series of activities whose basis is founded on good decisions and actions. In other words, for a nation to be successful, the human element has to make exemplary contributions to the journey. The head of government and the supporting cast of ministers, the administrators and foot soldiers, the business community and citizenry, all have to pull their weight and some, in various and sundry combinations, have to excel at their assumed and given responsibilities and tasks. African countries will not stumble into success because success is an act of will! 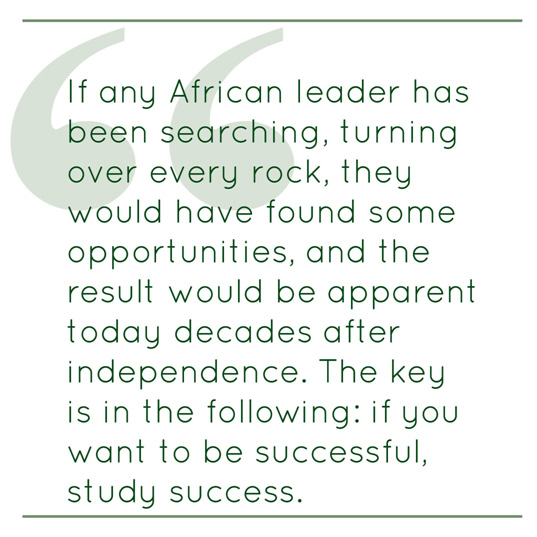 To state that African leaders are not searching is presumptive, but it’s presumption that is founded on a bedrock reality. If any African leader has been searching, turning over every rock, they would have found some opportunities, and the result would be apparent today decades after independence. The key is in the following: if you want to be successful, study success. To extrapolate, therefore, if you want to be a successful nation, it pays to study the track of successful nations. There are many to choose from. The evidence is manifestly incontrovertible that many countries including the industrialized Western economies have traversed the road from poverty to prosperity.
Their journey is a bit different from the one African countries are undertaking, but there are some nuggets of commonality in the experience of Western countries and the fledgling narrative of Africa rising. Western countries were once very poor. There are historical events that precipitated the economic boom that extirpated most of the scourge of poverty because it has not been eliminated. The age of exploration and the industrial revolution are two seismic events of note.

Africa is indeed rising, but not in the manner and circumstances that Western journalists are observing and reporting. Africa is rising very slowly from organic means. Population growth has spurned workforce resource and the pressure to provide for them from their infancy to young adult years. Educated classes that are being released into the workforce every year create added pressure on society to produce socio-economic activity that will enable them to fend for themselves and to excel at the same time. A by-product of the phenomenon is the rise in the population of entrepreneurs and businesses. A good example can be found in fashion and app culture. 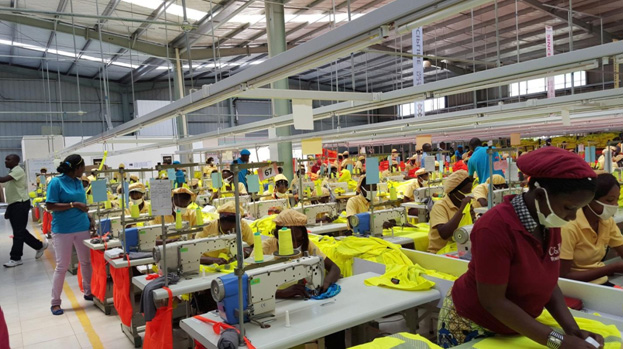 Fig 1. A Garment Factory in Rwanda

The narrative of the rise of the Asian Tigers and China comprises a wealth of information about going from poverty to affluence. Their experience is a vista into the leadership traits required for the journey as well as the strategy or compass needed to navigate the journey. The beginning of the Asian Tiger’s experience is found in post-World War II Japan. Each Asian Tiger and China studied Japan’s rise from the ashes of war to become a respectable power. It was instructive for the leaders because, in Japan and the Japanese people, they saw a path to their nation’s and their own success, provided they executed as close as possible to Japan’s diligence. Therein lies the key to the success of Japan, the Asian Tigers, and China—their diligence. The Asians eschewed talking for doing. They borrowed concepts and executed them successfully. 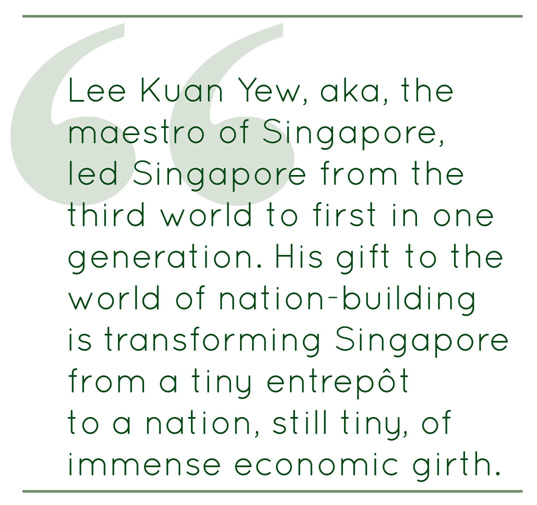 The following leaders were at the center of their nation’s rise from poverty to prosperity. Nobusuke Kishi started Japan on the road to economic prosperity with industrial policy at the center of his economic strategy. Generalismo Chaing Kai-Chek started Taiwan on the road to economic prosperity using multi-year economic development plans. Park Chung Hee led Korea from the abyss of economic ruin and chaos to the mountain top of successful nations of the world, using multi-year economic development plans and strategic risk-taking. An example of strategic risk taking is embarking on the development of Pohang Iron and Steel Works, now POSCO. A nation that lacks raw materials for steel production and energy to power the steel plant is not supposed to succeed in steel production. If you want an example, see the case of Nigeria’s attempts to execute steel production.

However, Park Chung Hee selected the best man for the job, and he made the unthinkable happen. Within ten years of its opening, the company reached the pinnacle of world steel production when it became the number one steel manufacturer in the world. Lee Kuan Yew, aka, the maestro of Singapore, led Singapore from the third world to first in one generation. His gift to the world of nation-building is transforming Singapore from a tiny entrepôt to a nation, still tiny, of immense economic girth. Singapore exports more goods and services than the top ten exporting nations in Africa. The grand master of all of them is Deng Xiaoping. He willed his people from poverty using a combination of all the strategies of Western nations, the other Asian Tigers, and Japan. The role of the leaders in the success of their nations cannot be overemphasized. One common thread to their rise is the gargantuan influence of manufacturing for exports. It was the engine that fueled the Asian narrative and brought prosperity to their people.
African leaders and their nations, on the other hand, have talked a great deal but have done very little. Rwanda is the exception. His Excellency, Paul Kagame, is working very hard to replicate Lee Kuan Yew’s “Singapore” in Africa. It is a gallant effort and good honorable work in progress.

Manufacturing for export is the ultimate elixir for the economic malady of nations. It is the one area in which African nations can find common ground with Western nations. Western nations grew economically by exporting their manufactured goods to the rest of the world. African people are well acquainted with Western products that were imported into their countries. The workers who worked at the plants that made products that their companies exported to African countries were beneficiaries of employment. The communities in which the manufacturing facilities were located were beneficiaries of the multiplier effects of wages. Finally, the companies themselves were beneficiaries of a market for their goods and the resulting amplification of capital resources available for expansion and investing in tangential ventures or entirely new ventures.

The basic reason the Asians entered into export-oriented industrialization is that it worked for Japan, first and foremost. There was a trail that they could follow. They simply needed to discover their own niche. In other words, each country had to find products that they could manufacture and export successfully and they did. If there is a place for African countries to start, the experience of the Asian Tigers is a great place. There is much to chew and digest in their story because most started with the Import-Substitution concept of industrialization. Only to drop it when they realized it was a bridge to nowhere for their economy and their people. Export-Oriented industrialization was not a given. The work to establish it as the vehicle for the drive for economic development and prosperity was fraught with risk and challenges. Without the commitment of a team of nation-builders in each country, the story of the Asian economic revolution would be stillborn. 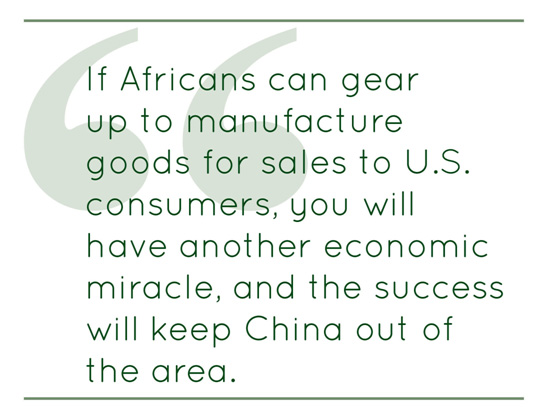 AGOA, the African Growth and Opportunity Act, is a piece of legislation that the Congress of the United States passed into law through the effort of President Bill Client’s administration in May of 2000. There were a number of lobbyists that pushed and prodded for the U.S. government to create a counterweight to China’s rise in the hemisphere. The idea was to help African countries access the U.S. market to sell manufactured exports. The rationale is simple. If Africans can gear up to manufacture goods for sales to U.S. consumers, you will have another economic miracle, and the success will keep China out of the area. It worked for Japan, Taiwan, South Korea, Hong Kong, Singapore, and China. The problem is that the promoters in the United States did not anticipate the reaction and response from the people AGOA was designed to help.

AGOA is akin to a jobs bill for African countries, but African leadership ignored it. Probably because they perceived that there was nothing for them personally. The United States was not pulling a China and coming with billions of dollars in hand to hand out. As a result, leaders missed the gem that is the idea of AGOA. The hidden benefit of AGOA is at the same time the ultimate path to economic development for African countries. The gem is the manufacturing for export production and the job opportunities it brings. First to the local community in which the manufacturing plant is located and to the country…to be continued.