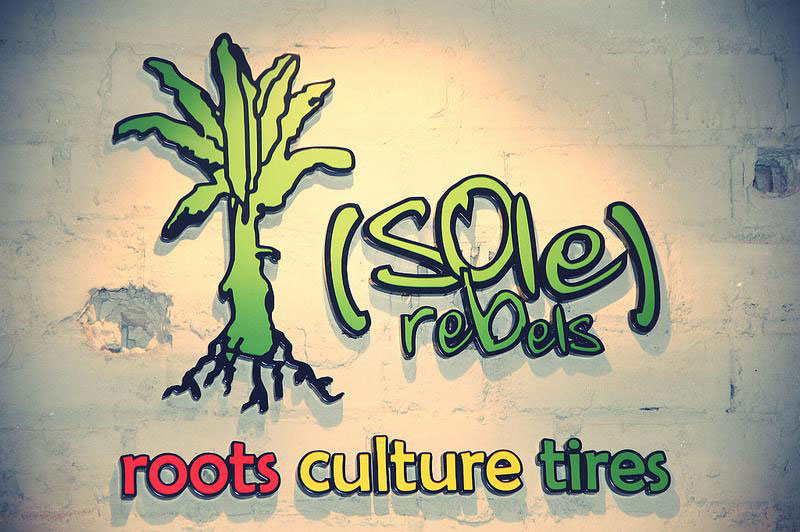 One Step at a Time

In 2005, young entrepreneur Bethlehem Tilahun Alemu founded the footwear brand, soleRebels.She began her business in the city she grew up in, Addis Ababa, Ethiopia. To build soleRebels, she focused on integrating the culture of her home and the skills of local artisans into building a footwear brand that is at once contemporary and also is rooted deep in the traditions of Ethiopia.

Alemu set out to provide a way for Ethiopians to generate their own prosperity and be successful, not just in their community, but in their country, and throughout the world. With the genesis of soleRebels, she helped local people by providing a foundation to excel, but relied on their talent and ideas to fully build and shape the brand of artisan crafted footwear. The simple yet powerful motto of soleRebels is: “Making the world a better place. One step at a time.” 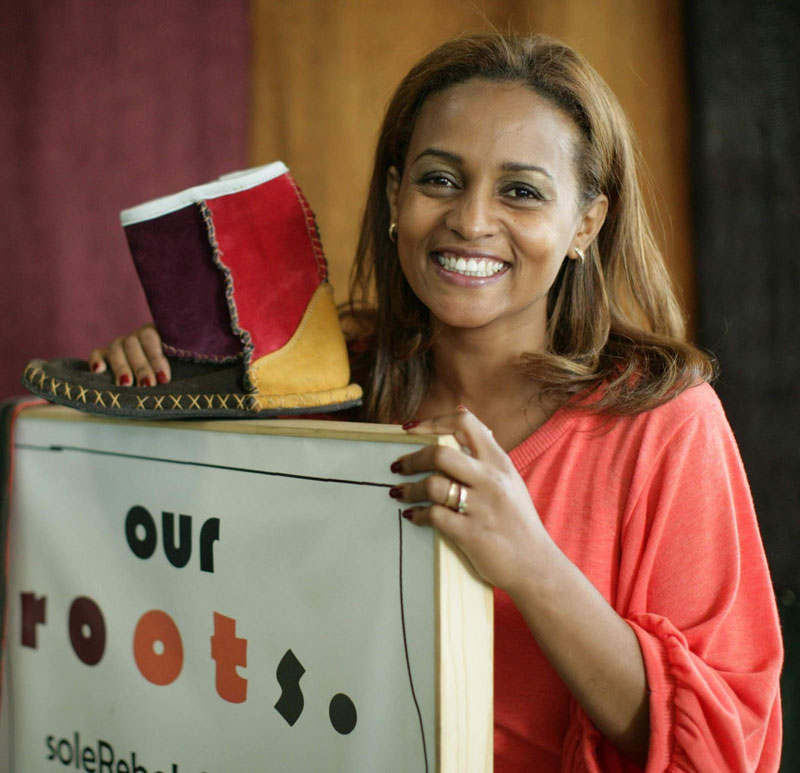 While soleRebels has been Alemu’s primary endeavor, she is also the founder and creator of Republic of Leather and the founder and CEO of Garden of Coffee. Her exceptional entrepreneurship has not gone unnoticed. Among the long list of recognition, she has been named by Forbes Magazine as one of Africa’s Top Five Most Successful Women and was in their World’s 100 Most Powerful Women List. Forbes Africa listed her as one of the 100 Most Influential Women and the Guardian said she was one of Africa’s Top Women Achievers of 2013. Alemu is also a World Economic Forum Young Global Leader.

Since 2005, soleRebels has greatly expanded. While the headquarters are still in Addis Ababa, Ethiopia, there are eighteen retail locations in nine countries (Ethiopia, Taiwan, Singapore, Japan, United States, Switzerland, Spain, Austria, and Greece) and that number is still growing! Alemu says that they “will open 50 to 60 more standalone soleRebels retail stores over the coming 18-36 months,” and “are on track to open over 150 stores and generate over $250 million USD in revenues by 2018, and over 500 global stores and $1 billion in revenues by 2022.” SoleRebels also has its footwear featured in Urban Outfitters stores in the US.

Besides physical retail space, soleRebels has also expanded online. The brand is sold through ecommerce sites like Amazon US and UK, and the EU’s number one online footwear retailer, spartoo.com.

According to Alemu, “soleRebels is also the first and only global branded retail chain from a developing country.” Sharing the traditions of Ethiopia is an important aspect of the soleRebels brand, not just in the shoes themselves, but also in every new store opening is a celebration intended to illustrate that.

There is a lot to the soleRebels brand, and Alemu has strived to create and withhold a list of core values at the root of her business and product.

First and foremost, soleRebels is a brand that supports people and community. Its creation provided an opportunity for the people in her home city to prosper and climb out of poverty themselves. They supply the labor and the creative vision of the brand through their Ethiopian culture and traditions. Each shoe is hand-crafted by the employees of soleRebels, made from recycled tires (for the soles), and home-spun cotton for the shoe itself. The colorful designs of the shoes are created on looms and weaved with care by expert artisan hands, passing along the traditional patterns Ethiopians have weaved for centuries. The footwear is eco-friendly; it keeps old tires out of the landfill and prevents them from being burned, thereby releasing excess CO2 into the air. SoleRebels is also the only certified World Fair Trade Organization [WFTO] Fair Trade footwear company in the world. This certifies that in addition to the product being fair trade, the business practice is also fair trade, which is an important distinction Alemu is proud to have.

“Each and every soleRebels shoe radiates with what we call the essential four C’s,” says Alemu. “It is the shorthand we use to guide our design and production process, ensuring that each and every soleRebels shoe possesses the core qualities/attributes of: Creativity, Color, Craftsmanship, and Comfort.” Consumers are drawn to the design of the shoes’ look and also comfort level, reporting that wearing a soleRebels shoe is like putting your foot into “your favorite sock,” which is where the term “Walk Naked” came from as a tagline for the footwear line. Aiming to understand what consumers want and desire for their favorite shoe, soleRebels keeps every style of shoe they ever made on their website. People can always choose the style that works for them instead of having the business change styles too frequently. SoleRebels aims to keep customers for life. 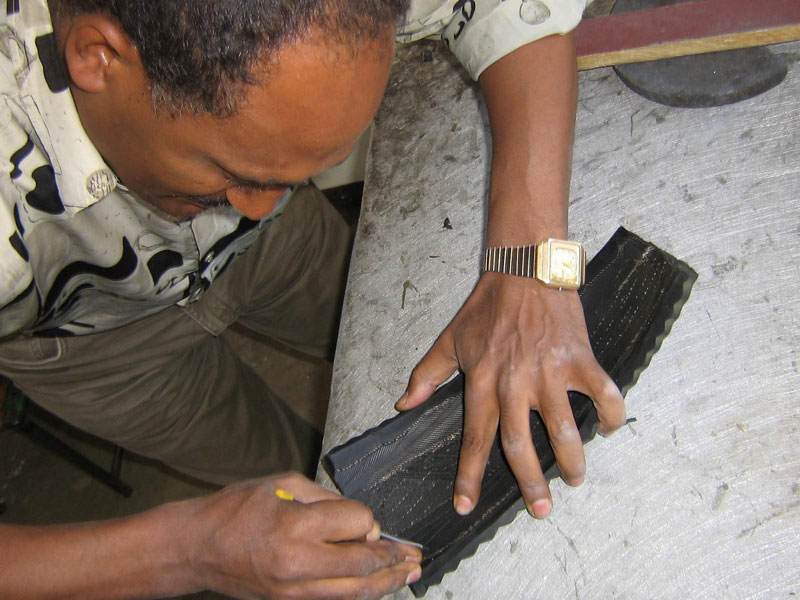 When asked, in an interview by The Brandlaureate, about the success of soleRebels, Alemu said, “People want their brands to be real. I love the fact that soleRebels is the brand, the factory, the marketer, the designer, the shipper. It’s a radical yet beautifully simple repositioning of the producer-consumer paradigm, a case of the product you as a customer wear and love being made directly by those designing, making, and selling it to you.”

But the wonderful effect of this brand is not just in the producer-consumer dynamic, but also what the company has done for its workers, and what many entrepreneurs and start-up businesses in Ethiopia and Africa should set as a top priority when creating their companies. By Alemu keeping the focus of her business on helping her community, by setting out to prove that positive change can happen in a town like Addis Ababa, in a country like Ethiopia, without having to travel to another country, she discovered the “magical effect” of soleRebels had on its employees.

“People have started making their own money and are in positions where they can support their extended families,” said Alemu. “People are buying their own houses and condominiums; their children go to good schools and they can afford to send them to post secondary education–college and university. People also have changed through the different trainings we have given: people now dream of going out and doing their own business when it is the right time.” 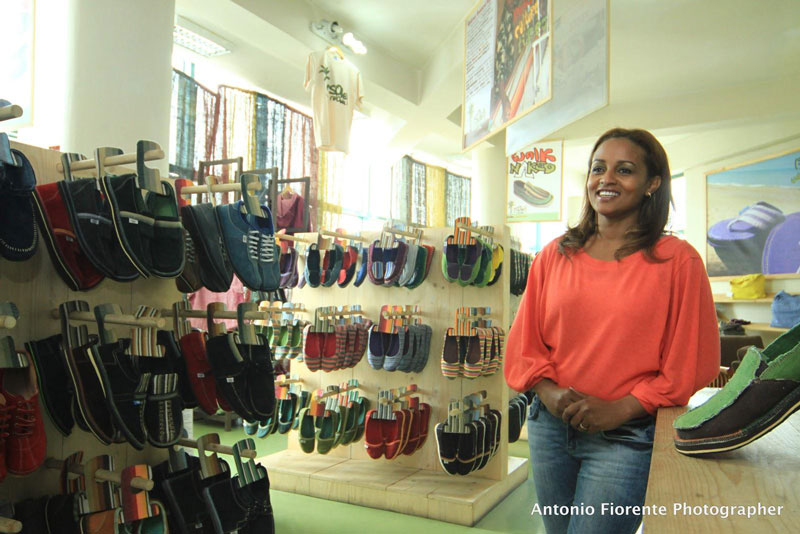 SoleRebels sets an example for all African businesses and entrepreneurs. It proves success is possible in a developing nation by everyday citizens who want to better their lives and use their own resources and experiences to do it. Change for the better can happen through entrepreneurship and under leadership like that of Bethlehem Tiluhan Alemu.

This article was initially featured in our Unleash Africa Newsletter.

About the Author: Gayle Cottrill