Patriotism and Profit Part V: How to Build Champion Companies in Construction Services

Patriotism and Profit Part V: How to Build Champion Companies in Construction Services
by John I. Akhile Sr.

Preamble
Intense strategic thinking is lacking in the deliberative construct of policymaking. For instance, countries commit to building industrial projects without fully fleshing out the intangibles of sustaining the resulting business. Questions like source of raw inputs, current and long-term sources of revenue to purchase raw inputs and all other necessary supplies, energy to power the plant, long-term customers for the business, fail to get concrete resolution. It is no surprise that the business fails. The same goes for state airlines. Lack of strategic foresight has also created a chaotic development paradigm for African countries.  Poor strategic foresight is the only reason that can be put forth for countries repeating the same mistakes for decades. Developing an incubative structure for building champion companies is the epitome of strategizing. It is building for the future. It can only happen in an environment of elevated statesmanship that internalizes the responsibility of the office occupied and by extrapolation bears the weight of the hopes and aspirations of the bestower—the voting public and every citizen of the political realm. 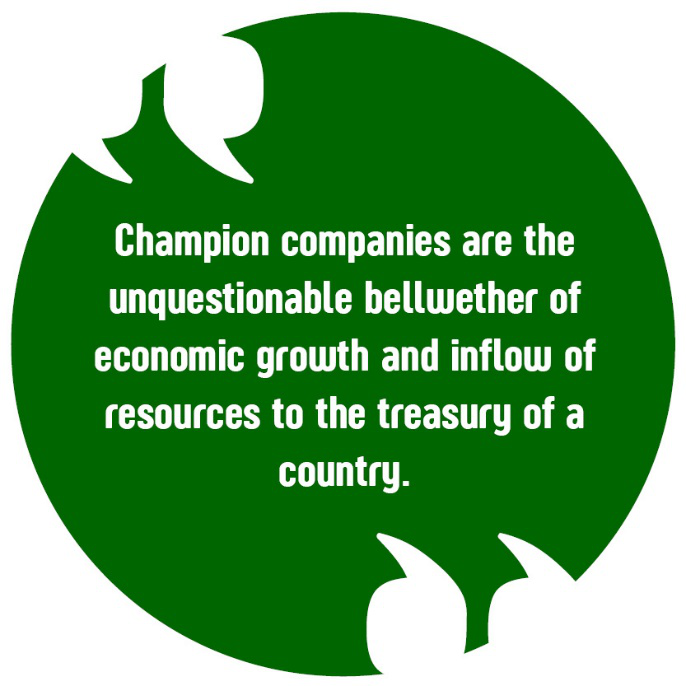 of a country. They do this in two ways: (1)  by creating a large number of direct and indirect jobs; and (2) by supplying goods and services to the local and international economy. For African countries, the objective of creating champion companies requires an interventionist approach to economic policy. The late Park Chung Hee referred to it as guided capitalism.

It starts by identifying the crucial weakness/es in the economy. What the Asian Tiger nations, Taiwan, South Korea, and Singapore, realized when they applied the same analysis to their economies fifty years ago, was that they had an unsustainably dangerous hard currency shortage and a long term deficiency in the economy’s capacity to generate sustainable levels of hard currency earnings. The solution was to amplify the supply of hard currency to their economies. In the case of Singapore, it also included the need to create jobs. The solution to the shortage of jobs was to create an environment where foreign champion companies would locate production to Singapore for re-export to their (champion company’s) customers in the region and around the world. Each country devised its own unique approach to a particular situation in the country. Taiwan and South Korea had a similar export-oriented intensity using their local companies. Whereas Singapore, having a much smaller population and domestic market, affected the borrowed champion company strategy of allowing foreign firms to be the job creators and hard currency earners. Both solutions were easier said than done.  However, the countries committed to the plan and over a grueling process of inaugurating and executing the plan it began to show the desired results. The results bare out the success of the plan and the wisdom of the strategy. In the 2017 ranking of the world’s top exporting nation by Statistica, South Korea ($573.7 billion), Singapore ($373.23 billion), and Taiwan ($317.38 billion) ranked 6th, 14th, and 18th, respectively. 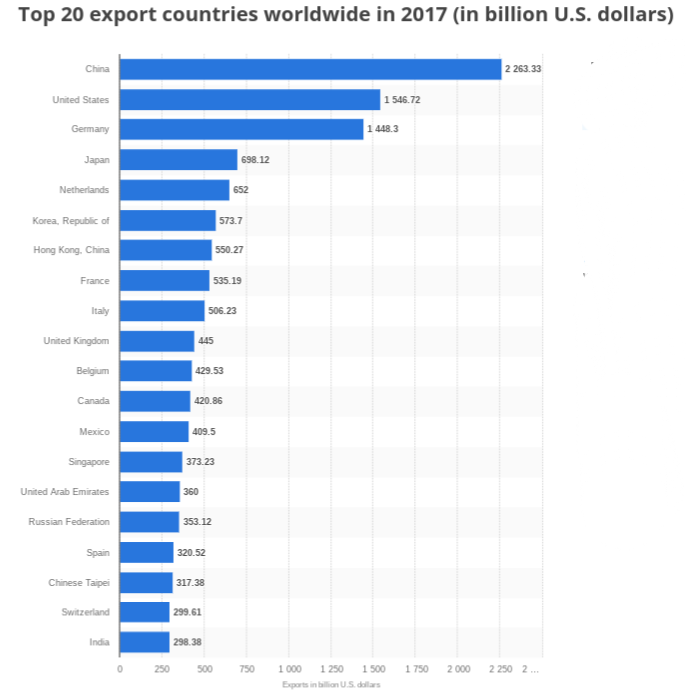 Conversely, the top ten exporting nations in Africa in the same year generated $313.10 billion in total exports, less than Taiwan’s. Combined exports of the three countries, South Korea, Singapore, and Taiwan, is $1.3 trillion, more all of Africa combined. What would happen to the economies of African countries if they tripled the volume of exports? Fact is it is not only feasible but very achievable. The arguments to the contrary are baseless and belie the reality that the continent already has a leg up on the Asian Tigers when they started their climb. For African countries, the cushion of commodity exports was not afforded the Asian countries, except China. From the perspective of having a foundation of commodity exports, African countries have a leg up on the Asian Tiger countries.

Selecting Champion Companies in Construction
Involving the entire country is crucial. From the outreach depending on the size of the country, select 2 to 6 dozen companies using a preset criterion that is common to all the candidates, including the size of the company, track record, and capital resources available. Eventually, the list will be sedimented to produce the best of the best of the group for the initial test run of the program. The companies should be provided staff from the brightest engineering minds produced in the country and also expertise from advanced economies to consult with and to help guide the companies. They should be supported with access to subsidized borrowing to bid successfully on all domestic projects to build their gravitas. The first stage of the process is to turn over as much of the road infrastructure projects, including those funded by international loans and grants, in the country to the companies. In some countries, the range and capacity of the local companies can also include bidding for projects in neighboring African countries. If a given country has not developed indigenous constructors that will enable resources for infrastructure to be spent locally, facilitating the involvement of regional companies is the next best thing. In the example, a constructor in Cameroon or Nigeria goes into DR Congo or Mali to execute infrastructure projects. The key is to be the low-cost bidder. International financiers will not object to competent African constructors who happen to have the lowest bid on the projects that they are backing. 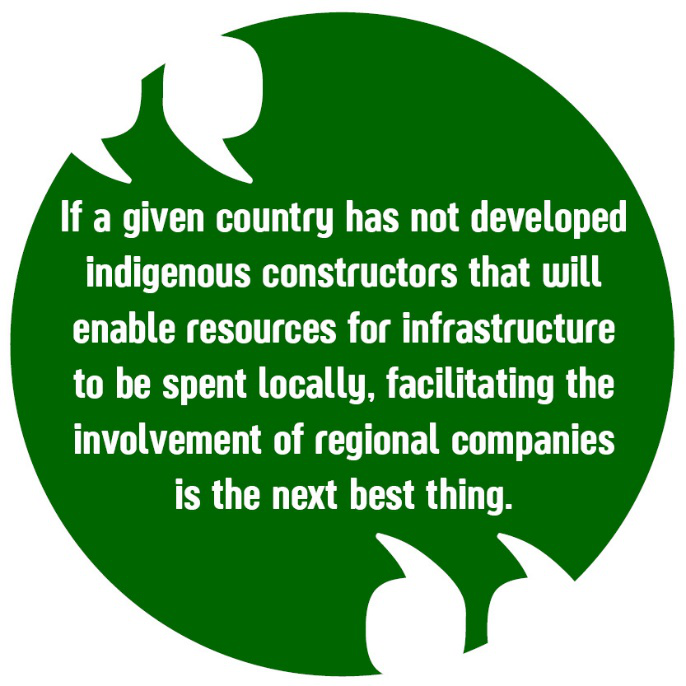 The lowest hanging fruit in developing local constructors is giving such companies the responsibility for maintaining all the existing infrastructure of roads and bridges in the country as the first step towards bidding for raw projects.

Oversight
In his memoir from Despair to Hope, Kim Chung-yum paints a vivid picture of the degree of intentionality that South Korea applied to the process of building an export-oriented economy. The same degree of intentionality. The process was in full glare of the country’s media and people. Successful companies received awards, and free publicity in the media and the unsuccessful ones lost access to low-cost government subsidized funding.1 The President chaired a monthly meeting of the export promotion council which meant to analyze and review the results of the previous month’s efforts during which the best contributors received awards. This sort of oversight will create a sense of urgency in the operators of companies who are receiving government support. Another crucial element of vigorous oversight is to ensure purity in the management of the program.

It is important to emphasize that building the flag bearers for the country is an all or nothing wager. The government has to craft the program and select the participants carefully. The goal of developing Champion constructors is to have companies that within ten years of the program’s inception can compete for projects in selected markets around the world while successfully winning and managing projects in the domestic arena. African construction champions that earn hard currency for their countries is feasible and possible.