Patriotism and Profit Part III: How to Build Champion Companies

Patriotism and Profit Part III: How to Build Champion Companies
by John I. Akhile Sr.

The key to building champion companies that will carve out markets for their products in the world market is “intentionality”. Intentionality is the act of channeling of thoughts, energies, and actions to affect, redirect, and impact the existing status quo for the express purpose of achieving a preconceived aim or objective. Champion companies and their captains are not organizations or people that government has to hold their hand to compel action. Rather, they are organizations and people you “unleash” with incentives, guidance, and resources. They are also not of cronyism because government should be looking for the best “Alpha” organizations, led by “Alpha” personalities. They are trail blazers who are not irrationally risk averse.  A pervading narrative that is often repeated by African people and promoters of business investment in African countries is that the perception of the risk of doing business in African countries is overstated. There is significant truth to the assertion. However, another aspect of the narrative of African countries, viz.: the community of entrepreneurs and enterprises and the environment in which they operate, is that the aversion of Africans to exporting goods and services to the world is vastly understated and reported on.

The main evidence of the aversion is the tepid response of African governments to AGOA. The response has materially affected the purpose of the legislation, which was intended to spur creation of export manufacturing enterprises that will produce goods for export to the US market at a discriminatingly lower tariff structure. At this time, there are two primary beneficiaries of AGOA legislation. The first are US businesses that were already operating in the area and pivoted to exporting raw materials under AGOA. The second are foreign businesses who have moved production from other areas to African countries in order to escape quota and tariff requirements and to take advantage of AGOA to manufacture for export to the US market.

Chinese companies are the bellwether in the latter category. A dated quote from AGOA website is instructive from two perspectives. One, that the website is increasingly dated reflects the lack of activity and two, this quote:  “When reflecting on AGOA one can conclude that AGOA’s trade performance and impact merits two perspectives; one of (unfulfilled) potential that consequently views AGOA as a broad failure, and one of unprecedented opportunity that – while clearly under-utilised – has provided beneficiary countries with just short of $50 billion of utilised non-oil duty-free market access over the period 2001-2014, and which has acted as a driver for continued adherence to various governance, human rights and economic standards.”1 AGOA was heavily promoted by the US government through elaborate events that were held in African countries and in the US to build awareness of the opportunity. The datedness is reflected in the timeline of the period. The lack of fresh materials in the AGOA information pipeline is harbinger of its difficulties in remaining relevant. It is a key reason why the legislation was nearly revoked by a Republican Congress when last it came up for renewal in 2015.

Used properly, AGOA is an economic development initiative for African countries. More specifically, it is a catalyst for industrial development. African countries have picked it apart rather than plucking the fruits. Supposedly it is missing agricultural products. Well, the legislation is not intended to promote entry of agricultural products because in the US, the Farm lobby will resist all such efforts; rather it is intended to promote entry of manufactured goods such as textiles, apparels, footwear, toasters, microwave ovens, and hundreds of other products for which the main competitors are other regions of the world, including East Asia.

Let’s review the intentionality of two separate governments. In Kim Chung-yum’s memoir, From Despair to Hope, there is this quote: “Throughout the 1960s, the government carried out export-oriented industrialization policies as the centerpiece of its strategy for achieving economic development. The government sought to expand and strengthen its capacity to promote an export-led growth policy by selecting and supporting export-oriented industries with a focus on small and medium sized companies, by improving government programs and administration systems for promoting exports, and by providing incentives to enter new overseas markets. Since 1964, the Ministry of Commerce and Industry prepared an annual Comprehensive Plan for Export Promotion, which systematically outlined the export promotion programs. Some of the significant programs were as follows: (1) 50% business income tax and corporate tax exemption on income derived from exports or export-related activities and foreign currency income earned. (2) Exemption of import duties on raw materials used for export goods. (3) Special reduction in interest rates for export financing. (4) Establishment of the Korea Trade Promotion Corporation (KOTRA) to collect information on and to develop foreign markets, and Korea Trade Company (Goryeo Muyeok) under the Korea International Trade Association (KITA) to provide export support to small and medium-sized enterprises. (5) Fostering export-oriented companies. (6) Awarding contributions to national exports according to the National Award Law (including technicians, engineers, and salesmen of manufacturing companies), particularly on Export Day.”3

In Singapore, the government of Lee Kuan Yew found itself in a very precarious situation with relatively high unemployment and a real threat of communist victory. To spur economic development, which could not come from within Singapore, the government created a plan to develop export industries through surrogate companies. The government went on a major charm offensive to attract companies to locate production facilities in Singapore to manufacture products for their markets. They prepared the environment by investing in Jurong Industrial Estate. It gave companies a shell for factories. They simply had to bring their equipment. It was prepped for water, electricity, and roads. All the companies had to do was to move their production into one of the prepared factory shells and start production. Singapore’s Economic Development Board hosted meet and greet sessions in the US where Lee Kuan Yew met Corporate CEOs and pitched the story of Singapore. It led to companies like Texas Instruments, now TI, Hewlett Packard, and General Electric, GE, among other high tech giants, migrating to Singapore to manufacture. In his book, From Third World to First, Lee Kuan Yew attributed the turning around of Singapore’s fortunes and changing the economic trajectory of the country to the success of the effort to attract US companies to move to Singapore. 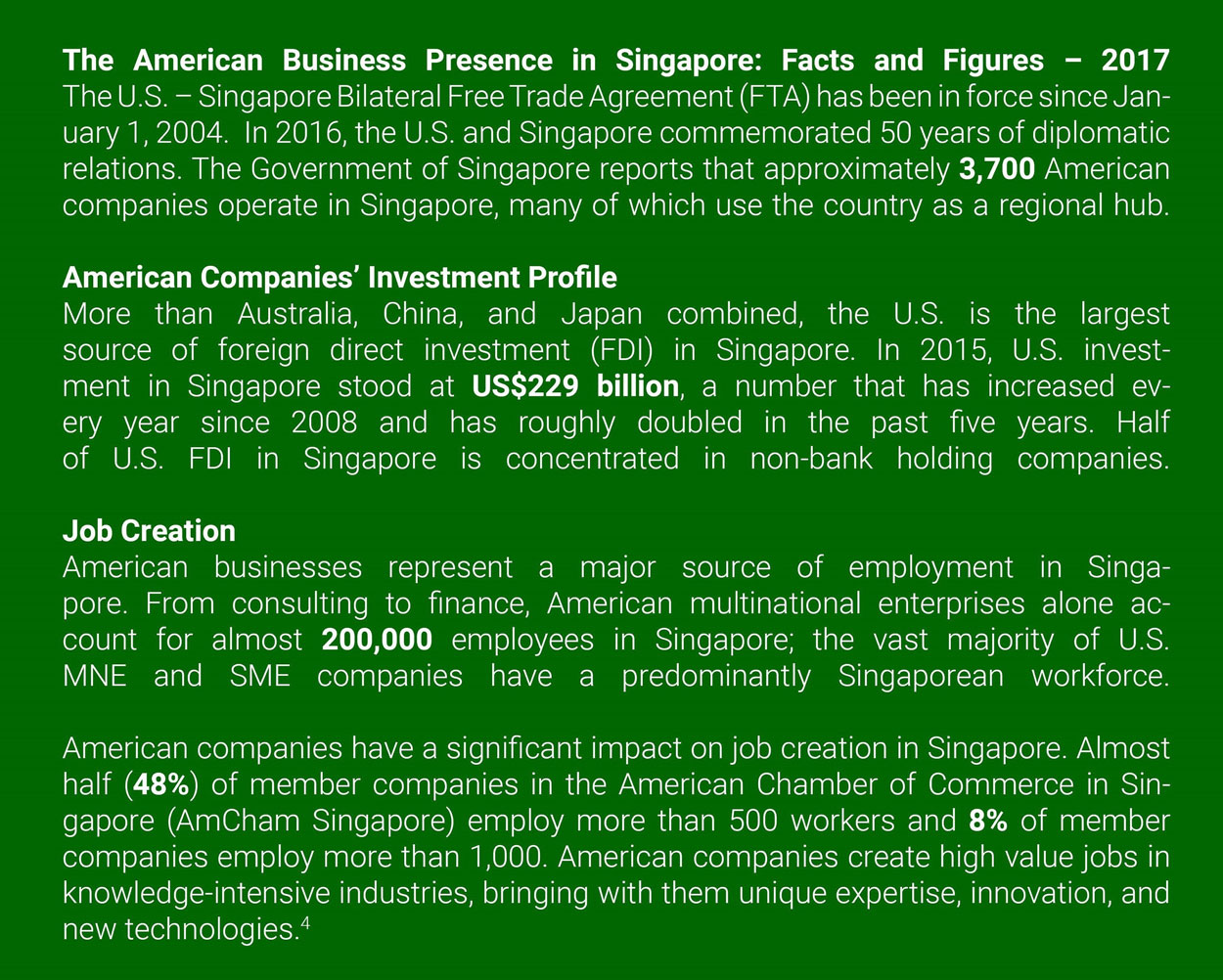 The Road to Success for African Countries

The road to success lies in developing a strategy and executing it to perfection. It requires a higher level of commitment to duty and service to the people that elected the government. Driven inexorably to achieving economic success from wherever the status quo of the country is at the present. The current circumstance in a country, including perceived lack of resources, is not delimiting. It is future actions, or lack thereof, that will determine what happens to each and every African country. A good starting point is the AGOA legislation.

It has not worked in African countries as it was designed because African countries have not worked it. Every African country should have a strategy for how to maximize the opportunity of AGOA that is managed by a ministerial-level task force. It is that important. There are 200,000 Singaporeans employed by American companies operating in Singapore today because the Economic Development Board of Singapore under the able leadership of the late Hon Sui Sen took massive action to change the narrative about Singapore in the US business community. The benefit of AGOA is that manufactured and processed goods from African countries can enter the US market duty-free, enabling such products to have price advantage over the competition. African countries should gear up to find a few products that they can produce and deliver to American customers and create an infrastructure to support initiative and effort.

On a broader front, countries have to reach a consensus on the greatest area of need in the country. For most African countries the greatest area of need is shortage of revenues, particularly foreign denominated revenues. It is why most African countries are aid dependent. In order to rectify the shortcoming, countries have to forge an answer that is rooted in a strategy to change the situation from one of perpetual shortage to surplus. African governments have to have the inclination and desire to partner with local entrepreneurs and businesses for the primary purpose of expanding foreign revenues to its treasury. It won’t happen in a haphazard environment where the government is a counterproductive antagonist of business and entrepreneurial activity…to be continued