African Countries Can Stand Tall by Eschewing the Begging Bowl

African Countries Can Stand Tall by Eschewing the Begging Bowl
by John I. Akhile Sr.

It is incredulous that in 2018, more than 60 years since the emancipation of colonial Africa, that the governments and leaders of the countries of the continent have not acquired a deep-seated understanding of the primary bloc of the world with which they have to do business. The bloc consists of the former colonizers who, coincidentally, are the most influential bloc of political and economic power on planet Earth. They are the ancient nations of the Western alliance which includes the once younger upstart but now, big brother of the alliance, the United States of America.

Modern Western culture is a derivative of the Protestant Reformation of the 14th and 15th centuries and the vortex of turmoil and wars under which the people of Europe lived. Medieval Europe with the Inquisition, wars of conquest, and the primacy of the Catholic Church, was a hellish existence for the average person and from it evolved a survivalist spirit of adventurist independence and self-help that remains to this day. It manifested in centuries of risk-laden voyages of discovery that led personages from ancient empires of France, Spain, Britain, Portugal, etc., to leave their homeland in search of the “golden fleece.” It created the industry of piracy and man-o’-war ships. Western culture has been built on “machismo,” grit, daring, and risk. It is the fuel that powered the Age of Discovery and invention that propelled ordinary entrepreneurs to colonize not just countries but entire continents.

Granted, it is a rather crude portrait of Western culture, which also includes arts, great scientific discoveries, philosophy, etc. However, it is also true that the culture of business that evolved from trade within Europe to trade without, is anchored in the machismo and daring borne of the era. One of the by-products is the Slave Trade. It is important that African leaders know their economic and political counterparties. The lack of knowledge and shear ignorance created the colonial experience that saw African chieftains hand their territories and their people to foreign entities expecting a fair deal. Bishop Desmond Tutu put it this way: “When the missionaries came to Africa they had the Bible and we had the land. They said ‘Let us pray.’ We closed our eyes. When we opened them we had the Bible and they had the land.” No one is to blame for history, but no one can be excused for failing to learn from history. The ignorance that informed the timeframe referenced in Bishop Tutu’s iconic quote cannot and must not be the pervading consciousness of African political and cultural leaders in the 21st century.

Take the case of The Gambia. Gambia made a huge news splash recently when it was the center of focus in a global foraging for money to build its economy.1 It was a classic extension of the begging bowl. Basically, The Gambia drew up a budget for which it had neither the means nor borrowing capacity to pay or implement. The budget had a shortfall of 1.6 billion Euros. The new President pulled out the old “BEGGING BOWL” playbook of going hat-in-hand to the international community to beg for money to pay its bills and pay salaries. It is the same playbook that African nations, by and large, have employed since independence. “’At present, the total cost of the flagship [projects] stands at 2.4 [billion euros] with a financing gap of 1.6 [billion euros]. It is this financing gap that I am presenting to you for funding. Given the economic challenges we have inherited and the numerous development issues to address, the effective implementation of the national development plan requires significant donor support,’ the Gambian President, Adama Barrow, told participants at the conference.”2

Let’s leave alone the absurdity of a nation drawing up a budget that is above its capacity to pay by more than a factor of 1.5. There is the reality of global politics. Even if the event’s goal of meeting the shortfall is well-subscribed—as has been reported in this case—getting the legislative bodies of the countries involved to actually pay up the pledges is another matter. Across the globe, poor citizens of Western countries have been led to believe by right-wing “nativist” politicians that their plight is as a result of migrants from Africa and other parts of the world. That their government is wasting funds on aid to poor countries, mostly in Africa. Aid to African countries is not only unpopular but, behind closed doors, is condemned and not without evidence, as throwing good money after bad because it is giving money to corrupt leaders who promptly steal it for their own personal use. The sentiment is captured by the following quote: “Yet, after six decades and tens of billions of dollars in aid and loans from the U.S. and other Western countries, Africa remains a ‘beggar continent’ hopelessly addicted to handouts and alms.”3

The evidence is incontrovertible and it is not unique to the Gambia. Virtually every African country has been plagued by leaders who divert monies earmarked for development for their personal use and that of their supporting cronies. The “cartoonish” former president of Gambia has a huge mansion in Washington D.C. and stole millions of dollars from the people of Gambia.4 The money invariably is partly if not wholly from aid funds provided by the international community.

One is sympathetic to the new president of Gambia. He fought a good fight and got rid of a man who had taken leave of his faculties but remained in charge of millions of lives. The challenge now for the new leader is to chart a course that will elevate the country and people of Gambia. It is to find the right strategy and the policies to drive it. Fortunately, there are many talented and resourceful Gambians and fellow Africans for him to rely on for counsel.

Lee Kuan Yew stated that the West began to pay attention when they heard him say categorically that Singapore was not seeking “freebies” but partnerships. When Western businessmen recognized that he was not passing a begging bowl they tuned their ears to his frequency. Is there money in the West? Absolutely! There is enough money in Western hands to develop African countries many times over. However, Westerners are not in the business of giving their money away. They are in the business of making more money. The aid that countries like the Gambia think they are receiving has strings attached. The strings are business arrangements promoted by citizens of donor countries that exploit the resources of aid recipient countries to the detriment of their people’s treasuries. There are a time and a place for aid monies. It cannot and must not be the central element of a development strategy. The Gambia should start with developing a balanced budget and deploy its private sector for the development of industries and commercial activities that will create jobs for Gambians. Put another way, the engine of development left in the hands of governments in Africa is a recipe for disaster!

Like other African countries, successive Gambian governments have been deploying the begging bowl strategy since independence. In 1966, GDP per capita of Gambia was the U.S. $107.00. In 2016, it was the U.S. $403.00. Clearly, the concept of economic development by the begging bowl has not worked for the Gambia and there is a preponderance of the evidence that it has not worked for any African country. 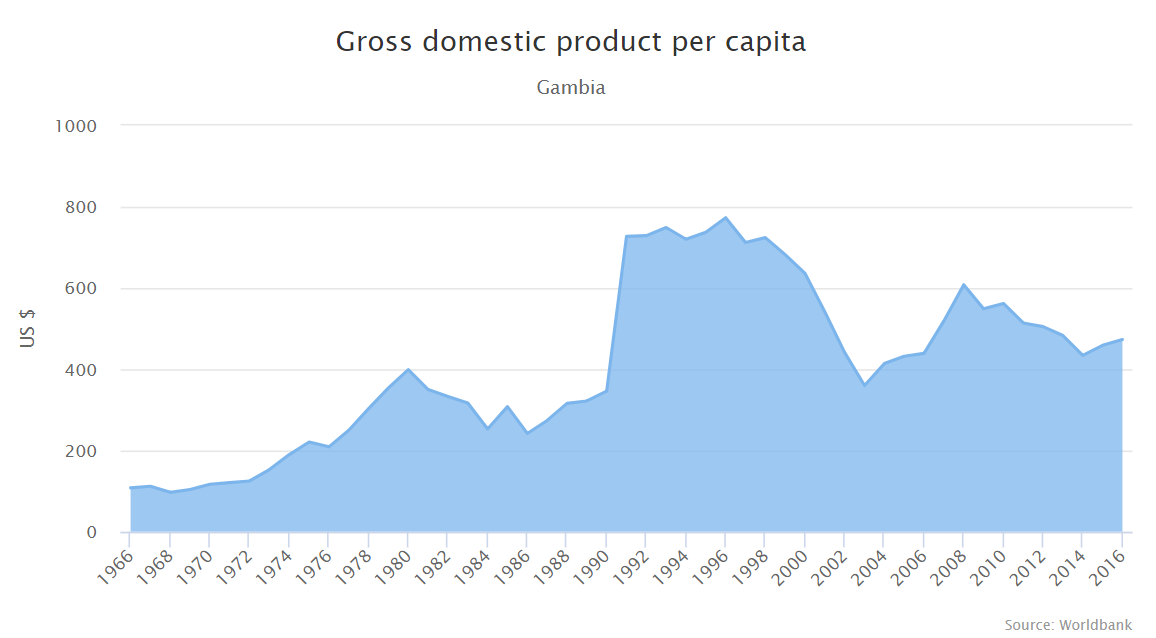 Fig. 2 Per Capita GDP of the Gambia.

Gambia’s new president should look inwards, first, to Gambians around the world for ideas and capital, because the Gambia is their country and patriotism requires that they rally to the aid of their country in time of need. There are successful Gambian businessmen around the world that have both capital and ideas that will help to move the Gambia forward. Next, he should look to wealthy Africans. There are numerous African billionaires and multi-millionaires that are potential sources of investment and ideas because the Gambia is an African country on the continent of Africa. Every African should feel the fierce urgency of Gambia’s plight and be willing to contribute to moving the people of Gambia forward.

The Gambia and other African governments and their leaders should forthwith abandon the begging bowl as a component of development initiative. Instead, approach development with independence worthy of independent nations that are determined to stand on their own, first and foremost, before any other means and options are considered. There is always a way out for the willing and determined. Benjamin Disraeli, a Jew who rose to become Prime-Minister of the UK, put it this way: “Nothing can resist the human will that will stake even its existence on its stated purpose.” In other words, I’ll do it or die trying! The continent of Africa needs leaders who will stake their existence on delivering good governance and prosperity to their people.