African countries are at an inflection point in their post-independence existence. Prosperity is truly within the reach of the countries of the continent. For predictive cause and effect, there are internal and external indicators. The most important internal indicator is that, slowly but surely, the character of governance apparatus of the countries of the continent is undergoing a seismic shift. There is a growing intolerance for economic malfeasance that has been the standard of political management of the countries since independence. Africans are waking up to the transcendent absolutism that good governance is a prerequisite for running successful countries.

It is a transitional process defined by a sun-setting of the ideas that drove the fight for independence and attendant attitudinal inclination of entitlement by the combatants of the era. The ideas and attitude are giving way to a new perspective on the meaning and dispensing of leadership. Since independence African political leaders have patterned themselves as monarchs, even though they attained power through the effects of a ballot. Mugabe, Museveni are good examples of the phenomenon. The main reason for optimism about the change in African countries is the evolving maturation of the body politic of African nations. The bar of their expectation has been inching up.

On the external side, events evolving in global power politics in unrelated geopolitical spheres could play a significant role in the way in which African countries develop in the next few decades. Some elements of buyer’s remorse is taking shape in the political calculus of Western countries because of the rising tension with China. Western nations were very instrumental in the rise of China. Western businesses and nations supplied technology and capital during the early stages of China’s economic transition from a communist command economy to a capitalist command economy under Deng Xiaoping’s leadership. They transferred production facilities to take advantage of low-cost Chinese labor. The motivation was China’s billion-plus consumer market. The blow-back of the calculus is that instead of a pliant China, the West is faced with a competitor-nation with global ambition. Because of it, the concept of producing in China is getting a second look but also because labor cost is creeping up not only in China but in some of the now-prosperous Asian economies. It creates a clear opportunity for African countries if leaders can take advantage of it.

For the first time since independence, there is a clear path for African countries to follow to achieve the elusive goal of economic emancipation and global economic relevancy. Economic development is within reach and social economic advance is more likely now than ever. There is also a road map for countries to follow. It is a road that has been successfully traversed in the modern era by countries that are on the world stage today. In 1960, China and South Korea had per capita GDP of $90 and $110 respectively. During the same year, several African countries reported better figures including; Zambia ($234), Cote D’Ivoire ($154), DR Congo ($220), Ghana ($183), Zimbabwe ($281), Senegal ($247), Egypt ($154), Morocco ($165), South Africa ($435), and Liberia ($170), to mention a few. See figure on per capita GDP of selected African and Asian countries. 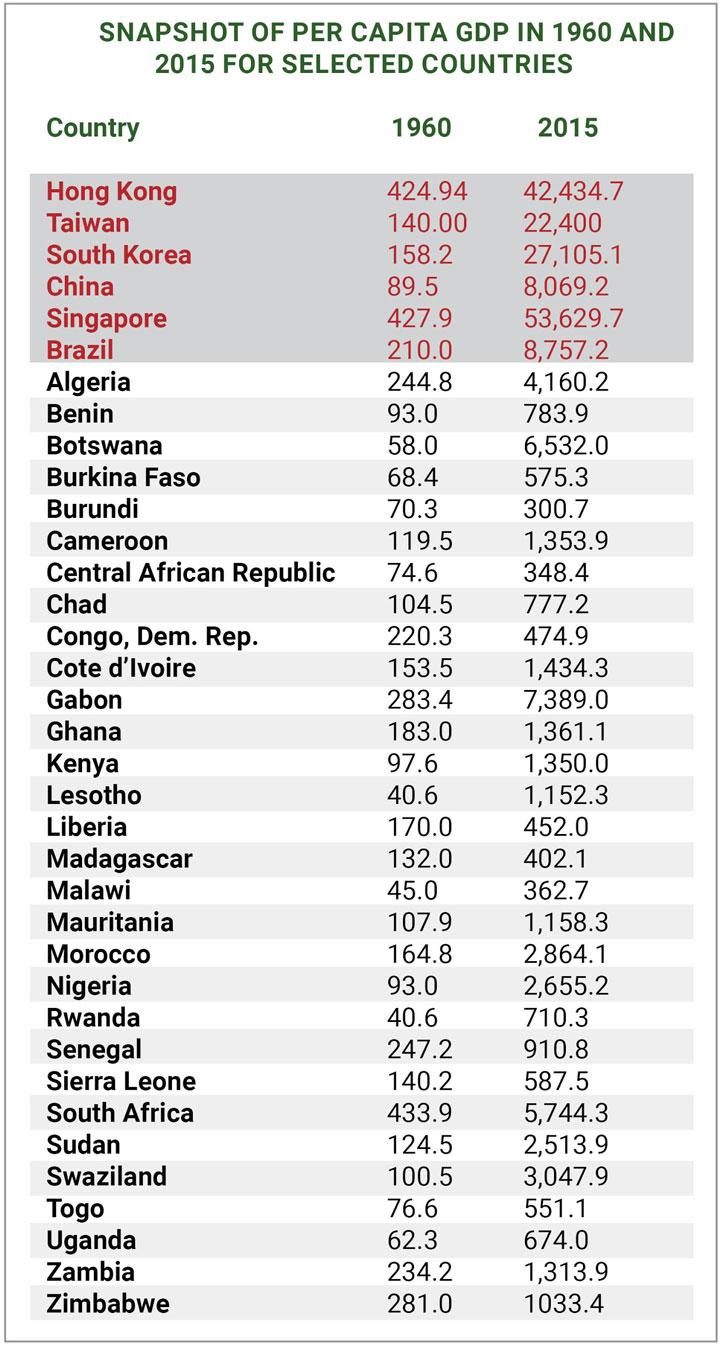 China now has the second largest economy in the world and is expected to surpass the United States as the top economy in the coming decades. South Korea has a top-20 in the world economy with about a USD 2 trillion economy. The Asian Tigers are a source of contemporaneous information that all African nations can learn from and be inspired by. Because they have executed a development strategy that has taken them from poverty to prosperity over the last 40 to 50 years. Singapore is a remarkable study. It is a city-state of 5 million people with no raw materials. Notwithstanding the handicap, its leaders managed to forge an economy that is one of the top export nations in the world. In 2017, Singapore exported USD 375 billion in goods and services, which is more than the exports of the top ten African nations combined.

The Asian Tigers each developed a unique strategy and tactics that was very effective for them. Although the world has come to recognize it as “Export-led Industrialization” the manner in which each country deployed the strategy varied. The strategy was similar but the tactics differed. That is why African countries can learn from the experience. Japan started the trend of export-led industrialization and the pattern was copied by Taiwan, Hong Kong, South Korea, and Singapore, the original four Asian Tigers. China followed in their footsteps, and Vietnam and Bangladesh are also benefiting from the strategy.

Bangladesh is the second largest exporter of garments after China. Bangladesh’s garment industry is a major employer and also the largest source of export earnings for the country. Garment manufacturing is labor intensive. It creates jobs at the lower rung of the job market and absorbs large numbers of workers. Bangladesh’s rising economic narrative is due to an aggressive pursuit of one tactic of export-led development strategy which is contract manufacturing for exports. Most of the garment manufacturing for export are Bangladeshi firms that are consigned to produce for Western apparel brands. In essence by pursuing a single tactic in an export-led development toolkit, Bangladesh has reaped a U.S. 28 billion in sales industry which is the largest single source of manufacturing jobs in the country. 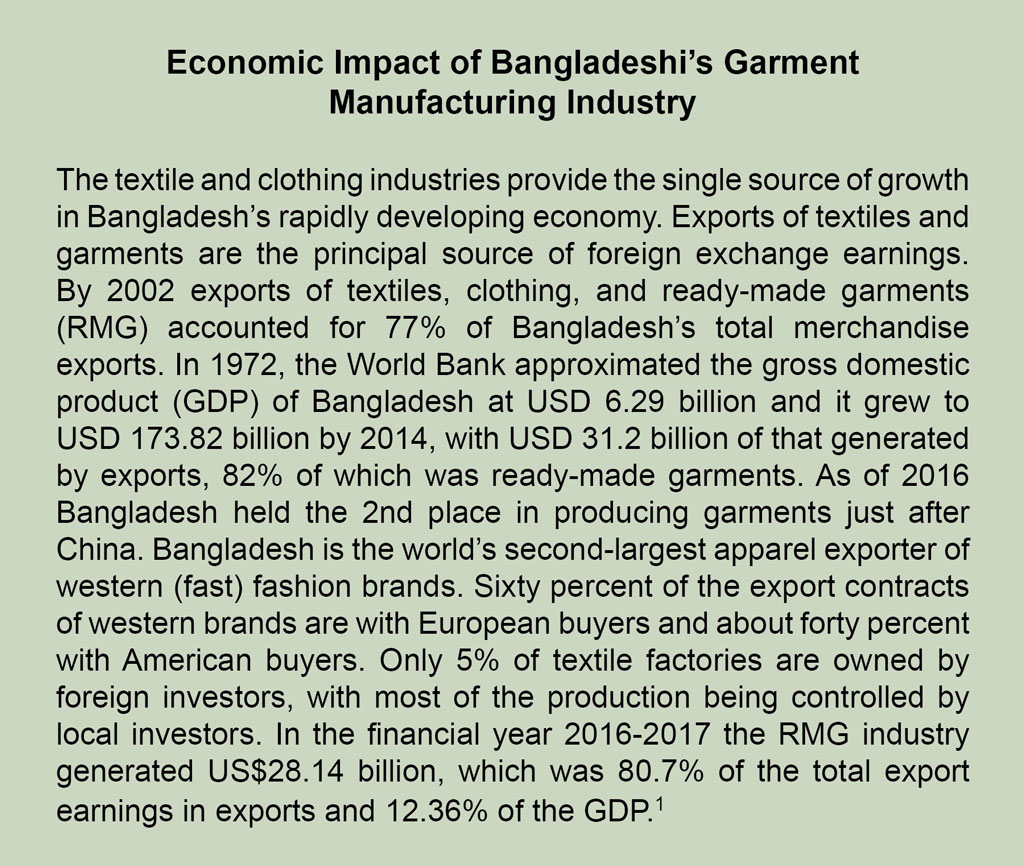 African leaders should adopt the strategy and devise unique techniques within the strategy that is applicable to their specific country. Within the umbrella concept of export-oriented development, there are four primary branches.

The Asian Tigers are a source of contemporaneous information that all African nations can learn from and be inspired by. Because they have executed a development strategy that has taken them from poverty to prosperity over the last 40 to 50 years.

Taiwan is not a country that has received a lot of attention for its economic success because the politics of its relationship with the mainland obscures the significant economic achievement of the country. Although some will contend that the economic achievement is the reason for China’s determination to reunify the island state. Regardless of the politics undermining Taiwan’s chance to catch a glare of the rays of success that shines on other Asian Tigers, its economic performance, like that of the other countries is every bit of a miracle. It is an island-nation of about 24 million people. It has a USD 1.2 trillion (ppp) economy with a per capita GDP of $49,800. In 2017, Taiwan exported USD 345 billion in goods and services.

Like the other Asian Tiger’s Taiwan pursued export-led economic development after implementing import substitution. It started with manufacturing labor-intensive textiles and other consumer goods for export. One of the hallmarks of Taiwanese export-led industrialization strategy was that it was transactional. For instance, when the Taiwanese learned that there was a market for canned mushrooms in the West, growing and canning mushrooms for export became part of the country’s export strategy. Taiwan’s computer industry evolved from its successful production of radios and televisions in contracts with mostly Japanese firms as well as in individual ventures by Taiwanese entrepreneurs. The computer industry laid the base of Taiwan’s current status as one of the world’s premier manufacturers and exporters of information technology products. Foxconn, Apple’s iPhone manufacturing partners is one of the world’s largest contract manufacturers of electronic components.

Foxconn employs nearly half a million people at its Longhua Sicence and Technology Park in Longhua Town, Shezhen, China. The factory is also known as Foxconn city. In 2016 Foxconn generated revenues of USD 131 billion. It has factories in several countries around the world. 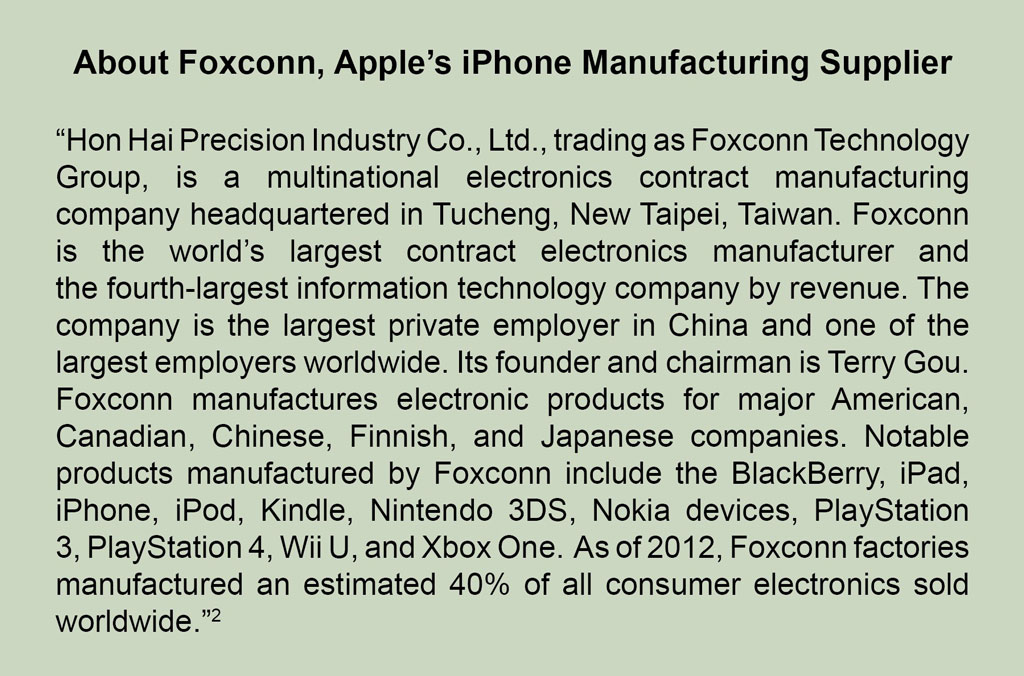