Nigeria has the potential of fielding a $2 trillion economy in 20 years. There is substantial evidence to support it. With more than 170 million people, most of whom are younger than 30 years old, there is abundant labor resources in the country and a significant reserve in neighboring countries. There are abundant known resources with which to leverage necessary economic assets to engineer the evolution. And finally, there is a degree of maturation in the internal leadership and in the politics of the country to engender hope that there is finally at long last, a flicker of light in the dark tunnel of social, political, and economic malpractice that its leaders have visited on the country since independence in 1960.

The essential ingredient for the evolution is a fully diversified economy that is based on multiple streams of hard currency income for the country and a low real unemployment regime for the vast workforce. Getting there will not occur by accident but rather through a deliberate policy of the country’s leadership to steer the ship of state away from crude oil dependency towards manufacturing, processing, and service-driven exports.

The reason Nigeria has struggled to engineer a diversified economy is not that it is impossible for a black nation, as most people whisper in their cocktail parties, to figure it out. Rather, it is because Nigerian leaders have failed to give it (diversifying the economy) the level and degree of importance it requires. Diversifying Nigeria’s economy is as necessary to the country as oxygen. It is a matter of survival but the leaders of the past have been too distracted by their personal political and financial agendas to take up the cause. The imperative of self-preservation and enrichment has been the master that Nigeria’s leaders have served dutifully and faithfully.

The cause of diversifying Nigeria’s economy is one that should be prosecuted with the urgency with which nations address an existential threat of war. Without a diversified regenerative economy that churns out jobs for the nation’s workforce and generates income with which to manage the country, it will be difficult to feed, clothe, and sustain the country and hence virtually impossible to manage the art of cobbling the nation together. For Nigeria’s sloganeering leaders, “Diversify or Die” is more apropos.

The task of diversifying Nigeria’s economy is hard work; that’s why no one has been willing to take it on for decades. It will involve managing a complex labyrinth of policy initiatives, coercive action, financial resources, outside-the-box ideation, and strategizing. In creating the foundation for an export-oriented economy then South-Korean President, Park Chung Hee took a personal interest in the endeavor and mandated the commitment of the entire government and people towards the goal. He chaired monthly export meetings to monitor the progress. In his memoir From Despair to Hope: Economic Policy Making in Korea from 1945 to 1979, Super Minister, Kim Chung-yum states:“Throughout the 1960s, the government carried out export oriented industrialization policies as the centerpiece of its strategy for achieving economic development. The government sought to expand and strengthen its capacity to promote an export-led growth policy by selecting and supporting export-oriented industries with a focus on small and medium sized companies, by improving government programs and administration systems for promoting exports, and by providing incentives to enter new overseas markets.

Since 1964, the Ministry of Commerce and Industry prepared an annual Comprehensive Plan for Export Promotion, which systematically outlined the export promotion programs. Some of the significant programs were as follows:

(4) Establishment of the Korea Trade Promotion Corporation (KOTRA) to collect information on and to develop foreign markets, and Korea Trade Company (Goryeo Muyeok) under the Korea International Trade Association (KITA) to provide export support to small and medium-sized enterprises.

(6) Awarding contributions to national exports according to the National Award Law (including technicians, engineers, and salesmen of manufacturing companies), particularly on Export Day” 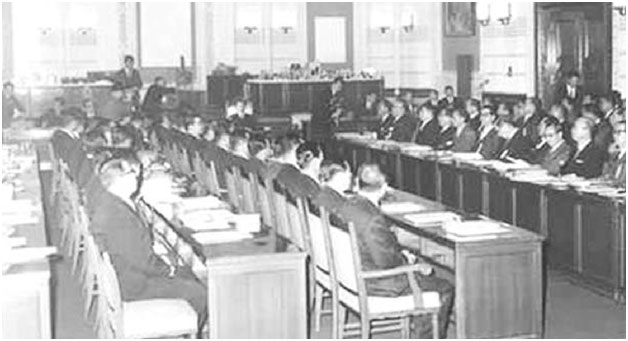 A Safe and Secure Way Forward

There is a major obstacle in the path of transitioning from a one-trick pony of crude-oil export, to a multiple stream of diversified hard currency income-earning nation. The impediment is Import-Substitution Industrialization, aka ISI. It is both a failed and dangerous economic strategy. In order for Export-Oriented Industrialization to gain traction, ISI must be enabled to die a natural death because the results it is producing for the nation is not justified by the level of resources it controls.

It is neither feasible nor necessary to dismantle ISI because there are jobs and capital investments associated with it. But it is imperative that it should be curtailed going forward. If the curtailment and modification of the effects of ISI is skillfully managed, it will yield very beneficial effects on the economy and create millions of jobs in Nigeria. To gain the skills necessary to skillfully dismantle ISI without adverse effects on the economy, Nigeria’s leaders should seek ideas and consult with nations from whom they can glean best practices. The first thing that policy wonks need to consider is that any strategy should have a beginning point, a middle point, and an endpoint. The safe and secure way forward is to add a vigorous export-oriented strategy to the ISI base that has been in place for decades.

Conversion Industries: The first and low hanging fruit in the matrix of export opportunities is “conversion” industries. They are a no-brainer for Nigeria. As the term connotes, these are industries that will convert raw materials that are currently being exported to finished goods in the country and then export the finished goods directly or through marketing companies in their home countries or in foreign markets. Many projects in this sector can be structured with compensatory trade techniques to be self-funding for private and public sector companies.

Foreign Companies Manufacturing for Export: The second one and just as important as the first, is Nigeria selling foreign companies on the idea of locating industrial plants for manufacturing and processing in Nigeria. These are companies that already have an established market for the products in their home markets and in most cases, in markets around the world. It is the Asian playbook that China and Singapore have used to great effect in crafting their economic resurgence. It will work in Nigeria as it has in the places mentioned if Nigeria can learn to work it.

Nigerian Companies Manufacturing for Export: The third area is to research areas in hard currency markets in  low-capital, high-labor-intensive sectors that are open to competition. And to develop a plan to introduce products into the sector or sectors using the stair-climber approach. It is the path that South Korea, Taiwan, and Hong Kong deployed to great effect. It is also the strategy being prosecuted by Vietnam. There are naysayers within and without African countries that vehemently contend that African countries and their people lack the skill-set to embark on exporting goods and services to the global market. The Asian Tigers also had naysayers. the Late Goh Keng Swee referred to them as “false prophets.” African countries and their leaders, like the Asian Tiger nations and their leaders, should disregard false prophets and trust in the inherent talents and abilities of their people. With proper guidance and good policies, African nations will find their comfort zone in competing for market share in the global economy.

Tourism as an Export: Tourism is a tangential but very powerful export industry. In this case, visitors who want to rent a bit of the culture and experience of a country bring the hard currency to the country. It is not part of the three core export-oriented industrialization strategies but is a complementary aspect of all of them and of the hotel, motel, and restaurant industry. Visitors who visit a country are also very likely to patronize the country’s exports in their home markets.

The first task is to ensure that the existing foundation is modified to support the conversion to export-oriented industrialization and not the other way around. It should start with putting some governors, i.e., restrictive parameters, in ISI. The first governor is to categorize ISI industries into segments: critical to the economy, neutral, and not critical. The ultimate goal has to be to wean all ISI companies from the dependence on government for the hard currency that they need to import supplies. At least until the intermediate industries that will eliminate the need to import semi-assembled manufactured and processed goods are in the domestic economy.

ISI Companies that are Critical to the Economy: The companies in the critical category should be reviewed to determine how long they have been operating an ISI model. What they consume in hard currency per annum and how much local sourcing they have done since the inception. Every company in this segment should be given a timeline to make arrangements to source their own hard currency to import supplies, graduated on the basis of the length of local operations. A company that has been operating for ten years, for instance, may get five years to sort it out. Others may get less or more.

ISI Companies that are Neutral: They are neutral because they may have a large labor force and manufacture products that are useful though not critical in the economy. On this basis, there would be justification to continue to allow unfettered access to hard currency as per the timeline for them to become independent in sourcing hard currency for importing their semi-assembled inputs. Companies in the neutral segment should be judged based on how long they have been operating in the country. From the grading, the companies in the group may get a high of five years and as low as one year to sort out how to import supplies without drawing hard currency from official sources.

All the companies should be encouraged to invest in industries or in ventures that export goods. It will not be necessary for the companies to venture into export operations, although that would be a good outcome. They could enter into a joint venture for an export business and still achieve the goal depending on the size and export capacity of the joint venture. Some of the funds earned from the activities can be used to import supplies. The introduction of a governor such as described into ISI will have the following effect. (1) It will force established companies to become exporters of goods and services. (2) It will create new industrial and service ventures that are export-oriented. (3) It will create new jobs. The first two will expand foreign exchange generating capability of the economy. All three will boost economic activity. The third will create happy and contented citizens.