This article is a continuation of Re-Engineering Development in African Countries Part Nine.

To the eternal credit of the founding leaders of the Asian Tigers, they asked and answered the most important question that leaders have to ask and answer if they want their countries to traverse the road from poverty to respectability. The answer to the question creates the impetus, if you will the sense of urgency that is required for people to unleash their subconscious and conscious human and material resources from latent to kinetic. The question is simple. How will the nation make a living? The answers vary from one country to the other.

The question is exclusive of the internal-domestic oriented production and distribution of goods and services. It relates to the exchange between countries in the global production and distribution of goods and services. What do African countries do for a living? What can they do? The answer to the former is that African countries mainly sell primary commodities to other countries in the global market. The primary exploiters of the commodities they sell are non-resident owned enterprises, i.e., companies owned by non-residents. The benefit to the countries is from taxing the activities of the companies. As it stands today, it is an untenable position for the countries of the continent. However, It is more devastating for the long-term prospects of economic prosperity because, with every passing year, the resources being exploited dwindle, while there is no material answer to the question of diversifying how the countries make a living.

But it is worse than that. Africans have been buying another big lie; which is that African countries can use social media and apps as an engine for economic prosperity. Nothing could be further from the truth! The primary engine of social media and apps, are hand-held devices, cell phones if you will. However, cell phones and the data highway on which they drive are hard currency expenditures to most if not all African governments because the hardware is produced outside of and imported into the countries. Data access is leased from companies who are paid in hard currency. Nothing against the phenomenon of social media and apps but it is important for leaders of African countries to understand there is no shortcut to economic prosperity. It is also important for every African country to take a hard look at the cost-benefits of unfettered importation of hardware into their countries that adversely impact the availability of hard currency for other investments. The entities who are benefiting from the lie are social media companies like Facebook and Twitter and manufacturers of hardware that African countries import by the tens of millions.

There is no substitute for basic industries in sustaining human existence in the 21st century. Industries like Steel, Aluminum, Copper, Base Chemicals and Petrochemicals, Machine Tools, and Agriculture, etc. These industries supply intermediate products to manufacturers and processors. An absence of basic industries creates a production gap that limits a country’s ability to industrialize. However, it is also true that developing basic and intermediate industries requires a private sector that has the wherewithal to manage the capital-intensity required by the sector. Due to a low level of convertible income generation capacity, African countries are limited in the amount of hard currency resource to spur development of basic and intermediate industries. The modus-operandi for bridging the gap between where African countries are today, relative to their hard currency income generating capacity and where they need to be in the future has to be the model of the Asian Tigers. It is a “stair-climber” approach that each Asian Tiger nation employed to varying degrees.

A study of the Asian Tiger’s experience reveals that the initial step each one took was to rectify the source and level of hard currency inflows. Coincidentally, the step of increasing hard currency inflow also dovetailed with the answer to the question of how the country will earn its income. Except for Singapore, which took a different, albeit related approach, each Asian Tiger nation determined that they will earn an income by manufacturing or processing labor-intensive goods for export to the global market. They identified a select group of products that would the focus of an export initiative based on industries that were labor-intensive but low in capital requirement. At the same time as they were addressing the question of how the country would earn an income, they were also addressing unemployment in the country. Hong Kong started with garments and small-scale electrical appliances. South Korea started with 13 export products that included among others; garments, plywood, rubber products, canned mushrooms, fish, and shellfish, etc. In 2015, South Korea’s export revenues topped $500 billion, ranking the nation as the 5th largest export nation in the world. It is even more remarkable that they started on the journey of export-oriented industrialization in the early 1960s. 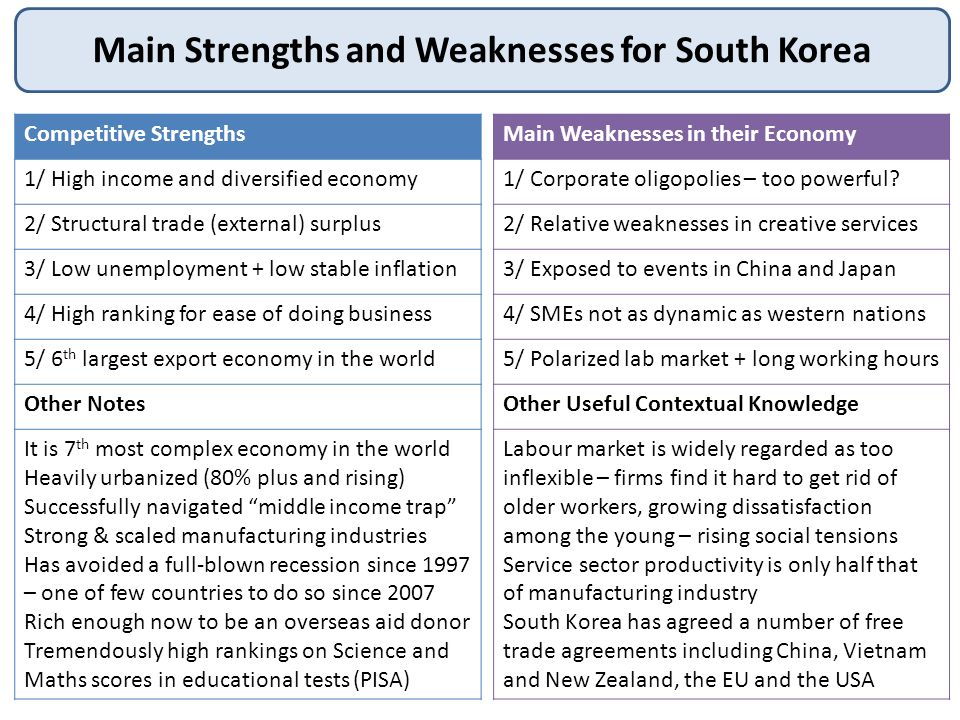 Fig 2. Tale of the Tape for South Korea

The answer to the question of “how will the nation earn a living?” therefore, has to be a comprehensive yet easily identifiable process. The most successful Asian Tiger’s determined that their people will make goods to sell to the global market and to use that base to climb the ladder of economic and technological advancement. Making the transition requires a second action, which is to marshal all available resources of the nation towards achieving the objective. In the interest of quelling the skeptics, let’s expand the analysis. All four Asian Tiger nations copied something from Japan’s experience of rebuilding after WWII using export-oriented industrialization. China copied a little bit from each of the original Tigers. In recent years Bangladesh and Vietnam are following in the footsteps left by all five nations. Statistically, China is number one in the world at more than 2 trillion dollars per annum in export revenue. All four Asian Tigers plus Japan are in the top 20. Japan remains number four and South Korea is number five.

By comparison, the top African nation is South Africa at number thirty-nine in the world with $83 billion in exports followed by Nigeria at number fifty-seven with 33.2 billion dollars. Vietnam comes in at number twenty-seven with 169 billion and Bangladesh at number fifty-six with 33.3 billion dollars. What is most instructive is how the Asian Tiger nations and Japan have little to no raw materials that they export to supplement their export revenues. One hundred percent of their revenues are derived from merchandise exports, which is tied to jobs, which is tied to multiplier effects in their home economies which is the foundation of their economic prosperity. The wonder is why African leaders don’t get it.

African countries have to earn more income in order to begin the climb to economic prosperity. They have to do it through multiple sources instead of one.  In order to earn more income, they have to restructure the wants, desires, and attitudes of society. In order words, society has to join in the effort to become successful by embracing the concept of delayed gratification. Every successful society has followed a close approximation of this path. It means reducing the pressure of consumption on the foreign earnings capacity so as to devote it to means of production. The limited hard currency resources of the countries should be focused on prosecuting a grand economic strategy that will emancipate them from economic slavery. To increase and diversify sources of revenues simultaneously requires countries to concentrate resources to expand the avenues by which the country earns its livelihood while maintaining or expanding the old sources of earnings. As a simple illustration, think of it in this manner: A (old source of income from commodity exports) + b (new sources of income from manufactured/processed exports) =C (Expanded and diversified sources of income).