In part one; we sketched the start of steel industrialization in both South Korea and Nigeria. We learned that South Korea’s development preceded Nigeria’s by a decade. We learned that the development trajectory of South Korea’s industrialization in steel production travelled at a different level of management intensity than that of Nigeria. It was learned that the late then-retired General Park Tae-joon, then-South Korean President, Park Chung Hee’s hand-picked executor of the plan thought nothing of sleeping (and did in fact sleep) on the construction site during the construction of the plant. He was also known to make contractors re-do every process that did not meet the prescribed standard. As for the funds with which South Korea developed its steel industry, we have a veritable blow-by-blow of how they came by the funds. All of this information is in the public domain because of the open accountability of South Korea’s Steel development process. In the case of Nigeria’s attempt to develop a steel industry, hardly anything is known. In the light of the foregoing let us examine the tale of the two countries in their common ambition to build a steel industry.

The South Korean Side

“…Despite starting from zero, with no capital, technology, or experience, the great journey towards establishing an integrated steelworks started with the founding of the Company on April 1st, 1968. Employees curled up in the construction site office then called ‘Rommel House’ trying to get the little sleep they could and eating rice mixed with sand, with the strong will to become a country of steel. Starting with the first production line in Korea that produced 1.03 million tons of crude steel in 1973, Pohang Steelworks was completed in 1983 after four expansion projects producing 9.1 million tons of crude steel…..Meanwhile, POSTECH and RIST (Research Institute of Industrial Science & Technology) were established to meet the needs of self-developed technology for technology independence, creating a firm connection between academia and the industry…”[1]

“POSCO (formerly Pohang Iron and Steel Company) is a multinational steel-making company headquartered in Pohang, South Korea. It had an output of 39.1 million tonnes of crude steel in 2011, making it the world’s fourth-largest steelmaker by this measure. In 2010, it was the world’s largest steel manufacturing company by market value. Also, in 2012, it was named as the 146th world’s largest corporations by the Fortune global 500. POSCO currently operates two integrated steel mills in South Korea, in Pohang and Gwangyang. In addition, POSCO operates a joint venture with U.S. Steel, USS-POSCO, which is located in Pittsburg, California, United States.”[2]

Park Tae-joon is in the hall of fame of American Metal Market and is considered one of the most successful steel mill operators in the world. His hall of fame inauguration biography states:“…work began in 1970. By 1973, the first blast furnaces at what was known as Pohang Iron & Steel Co. Ltd (POSCO) were making hot iron to feed a complex of casters and rolling mills. Over the next quarter century POSCO would help lead the industrialization of the South Korean economy which was still struggling in the 1970s to recover from the ravage of WWII and the Korean War. In 1988 the company completed its second-phase mill at Gwangyang and POSCO’s third-phase mill began commercial operations four years later. Park Tae-joon proved to be one of the most astute steel executives in Asia, with POSCO showing a profit within six months of shipping the first ton of steel in 1973. By 1998, the company was producing 25 million tons of steel annually and ranked as the largest steel maker in the world. POSCO’s rise was mirrored by the emergence of other industrial companies—such as Hyundai and KIA—in the automotive sector that relied on homegrown steel industry. During the 1980s and 1990s, Korean shipbuilding industry became the most efficient in the world.”[3]

What about the Nigerian side of the ledger you ask. While South Korea’s steel development has produced a hall of famer of a steelmaker and one of the world’s best steel manufacturing and processing companies, Nigeria’s steel ambition is still-born. The plants were never fully completed. Adding insult to injury, for years they were mothballed. Both plants, known as Ajaokuta Steel Company and Delta Steel Company, are in the hands of organizations who are either majority owners or contract managers on behalf of the government and people of Nigeria. 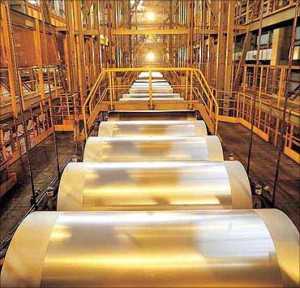 “Before now, successive governments have carelessly abandoned the Ajaokuta steel project, not minding its strategic role to the industrialization of our great country, and the significant growth and development it can bring to the economy. The abandonment of the Ajaokuta Steel Company (ASCO) by the federal government, after spending about seven billion dollars on the project, with less than one billion dollar to complete it has since been an issue of great concern to most Nigerians; particularly those who are versed enough to know what the country is losing for not ensuring the full operation of the steel complex…”

“THERE is no way you would visit the Delta Steel Company, DSC, Ovwian-Aladja, Delta State, the foremost integrated steel plant in Nigeria and south of the Sahara, formerly owned by the Federal Government, but now sold to an Indian company, Global Steel Holdings Limited, GSHL, headed by Mr. Pramod Mitel, without weeping for Nigeria. No matter how you look at it, it is clear that all is not well with the company, presently owned 80 per cent by a foreigner and 20 per cent by Nigeria….Information showed that since 2008 when GNIL was sent packing, no mining of iron ore has been done at Itakpe and the facilities were also being vandalized and stolen, yet the raw materials needed for DSC, which Itakpe was established to service, are not available. A forward-looking government should have tidied up whatever problem there is , and not allow it to befog a national agenda as is the case presently…”

The story line is that Nigeria has poured seven billion dollars into one plant and billions more into the other plant, both of which are far from optimal functionality. The sparkling result that South Korea has achieved, and the abysmal failure of Nigeria are indeed, a tale of two steel developments. The difference in both countries’ approach is one of accountability. We know who was in charge in South Korea, but we don’t know the point person in Nigeria’s steel development. There is no doubt that for a country the size of Nigeria, steel development is an important initiative. The problem is finding “non-thieves” to carry the torch. The only way to ensure that the right people carry the torch is to institute daylight accountability. The light should be on every penny spent on the project, and the management should be open to intense scrutiny by the public. For the people of Nigeria, there should be a demand of their government to carry out a retrospective forensic excavation of the whole sordid mess of steel production by examining every aspect of the process since its inception. The; who, what, when and how of steel production in Nigeria. It should include an exposition on all the expenditures, decisions, and betrayals of public trust. The guilty parties should need to be publicly shamed, and those who are alive should be made to pay the price for their actions. It is after this that the people should vote on whether they wish to continue to invest their money in the process. Finally, the country of Nigeria is a major fulcrum in not only its region but all of Africa. It will be instructive to the entire continent that a new regime of accountability has entered the lexicon of the chief violator of financial accountability among nations of Africa, Nigeria. It will have a transformative impact on governance apparatus of African countries if the country takes the lead in cleaning up its act and instituting a regime that eschews stealing of the people’s resources.