The primary enabler of evil deeds is for good men and women to do and say nothing. Nigeria is a classic manifestation of the truism of the adage. For more than fifty years, good people in Nigeria, few though they may be, have done and said nothing significant. Lest a confused soul should believe that looting the treasury is harmless, please read about the challenges facing the country by way of the exploits of Boko Haram. The society at large, good, ignorant and bad included, have glorified and hailed thieves parading in traditional titles, weighed down by the sacks of money they have stolen from the “hailers” and “glorifiers.” Meanwhile, Nigerian political and military leaders, empowered by delusions of grandeur fanned and driven by sycophantic syndrome of “‘hailer’ worshipping,” have helped themselves to the people’s treasury with abandon and absolute impunity. 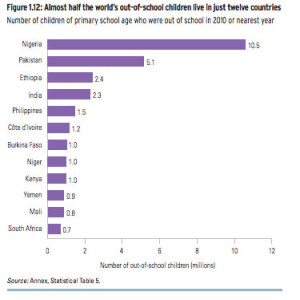 Nigeria holds the world record for the number of children out of school.
Source: Premium Times

They have used the stolen funds to amplify the balance sheets of foreign financial institutions, buy; expensive mansions in Nigeria and abroad, private jets, the most expensive cars and indulge in unholy ostentatiousness. In the case of Nigeria, it is not even important to point out specifics. The obvious infallibility is that people should be required to show a transparent path through forensic evidentiary processes, of how they came about the tens and hundreds of millions of dollars it requires to afford their lifestyle and assets they possess. Otherwise, they can not extricate themselves from the condemnation of having come about it by reaching into the people’s till. We know how Bill Gates came about his billions. In most cases in Nigeria, the private sector actors and their public sector “enablers” share the contents of the sack of loot from the people’s treasury.

Let us use the narrative of the experience of one industry to illustrate gigantic opportunities that Nigerian leaders have wasted since independence. I am referring to steel production. In this narrative, we will conduct a comparative analysis of the road that Nigeria and South Korea traversed in steel production and the status today, of the investment of precious treasury of their people. On any level of consideration, Nigeria’s steel investment was infinitely more bankable and stood a better chance of success than South Korea’s. The fact that it has attained a record of futility perhaps unequaled in the annals of public investment in any place outside the former Soviet Union, its East European Satellite nations and in Mao’s Communist China, is a dubious distinction of monumental proportion. An accurate characterization is that steel industrialization in Nigeria occupies a very lofty pride of place in the hierarchical structure of corruption. It is a veritable wasteland where the resources of the poor downtrodden people of Nigeria have gone to die. A place where diabolical manifestation of financial malfeasance of the highest order, has been perpetrated by the leaders of Nigeria, transformed into hordes of barbarians, on their people. More than 110 million Nigerians exist in abject impoverishment while the barbarians are “dancing” on their malnourished emaciated humanity.

Every time the government of Nigeria announces a HUGE project, the people should be on-guard because they are being prepped for fleecing. They should metaphorically grab their collective wallets and pockets (in this case, they should train a microscope on NNPC’s account and on the process of the contract being prepped for fleecing.) If there is no transparency, the result will inevitably be more multi-million dollar payouts and private jets for the people who will manage the award of the contract. It is a pattern that is tried and true, and the evidence is incontrovertible. In the steel industry, petrochemicals, refineries, LNG, buildings, roads, bridges, all have been a source of stealing from poor Nigerians. Every contract is tainted from the smallest to the largest.

The recent announcement that the government of Nigeria has plans to embark on projects that are expected to cost four hundred and fifty trillion Naira (about $3 trillion dollars), is Pavlov’s reflexive call to the trough for the corrupt establishment of the country. It is a subtle dog-whistle for everyone to get in line and to prepare for a huge payday. Soon the vultures will fan out across the globe to find foreign companies who are willing to play ball. The pattern of the demonic pact that has siphoned off trillions of dollars from the people of Nigeria since independence is simple. The first step is to approve companies with whom there is a forward understanding that ten to twenty percent or more of a given procurement will be siphoned off from the contract amount. In the case of the huge appropriation of four hundred and fifty trillion naira ($3trillion USD) that is three hundred to six hundred billion dollars that the people will lose to the thieves. To compound the people’s injury, the stolen money, inevitably, is deposited in banks in rich countries that don’t need it. See the LNG project. Nigeria loses (much-needed) development resources that it needs to build new industries, fund infrastructure and create jobs for its impoverished citizens. That injury does not include the fact that the inflated cost of the project dooms its future viability. See steel mills. The biggest question that no one has asked is; just who are these people and what has given them the perpetual right to bring ruination with impunity to the lives of more than 110 million of people. 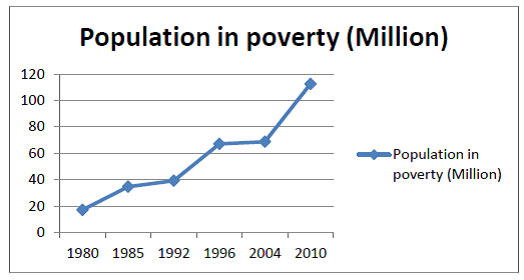 The South Korean Side: In 1968, South Korea’s then-President, the late Park Chung Hee’s hand-picked head of the steel project, retired General Park Tae-Joon embarked on the development of Pohang Iron and Steel Works—now POSCO. It was a project upon which the leaders of South Korea placed the country’s economic development aspirations and one in which they risked a significant portion of its financial future. To develop the plant, South Korea petitioned the rich countries to find the funds but failed to gain any support. They were turned down by all the multilateral lending agencies and Western countries including the United States, their patron nation. It was not because Western countries were against South Korea’s industrialization in steel production. On the contrary, they all believed it was unwise and doomed to fail. There were very valid reasons for the conclusion and all of it exists in South Korea today. South Korea, as a nation, has very few naturally occurring raw materials. It has to import virtually all the energy for consumer and industrial needs, and steel production is a major consumer of energy. South Korea also lacked domestic supply of most of the raw feedstocks for producing steel. Finally, it lacked the infrastructure to convey raw materials to the mill and products from the mill to customers. South Korea had to build a foundation of infrastructures necessary for the steel plant.

Undaunted the South Koreans proceeded on the chosen course. When Pohang Iron and Steel Works broke ground with the help of Japanese capital and know-how, Park Tae-Joon took complete and total ownership of the project. He treated the project like his money, and his future was on the line. On some level, it was his money because as a South Korean taxpayer, his taxes and labor ultimately, was the guarantor of the project. If it failed, his future and that of his family like the rest of the people of South Korea, would be adversely impacted. He watched every penny, ensuring that the project adhered to planned cost structures. He was very hard on the builders and made them re-do any work that was suspect or below quality. General Park Tae-Joon lived on the construction site through the duration of the project. Pohang Iron and Steel Works started production on-scheduled and in less than 15 years, established itself as one of the most efficient steel manufacturers in the world.

The Nigerian Side: Nigeria developed its steel program in the 1980s about a decade after South Korea launched its program. The time difference is instructive because it means that Nigeria had a fellow traveler with whom to consult about industrialization in steel production. Alas, it did not happen. Before China embarked on steel development, the late Deng Xiaoping went to Japan to discuss with then-Chairman of Nippon Steel, the late Mr. Inayama Yohishiro in 1978. He wanted to find out how Japan would go about developing a steel mill like South Korea’s Pohang. His response to Deng Xiaoping, to paraphrase, was that it won’t matter unless China could find a manager as capable as Park Tae-Joon. Who is the Park Tae-Joon that the then-leaders of Nigeria put in charge of the peoples treasury when  they embarked on developing a steel industry?

Nigeria has a significant portion of the raw materials necessary for developing steel. It has energy in the way of gas that at the time was totally wasted by flaring. It certainly was available to use to power the steel mills. There was a financial opportunity because of crude oil exports. Some of the raw materials exist within its borders and the rest within in Africa and most in very near proximity from other West African states. Yet, in spite of the advantages and opportunity, the result for Nigeria has been disastrous. There is no known point person that leaders of the day tasked with developing each major investment. Nigeria invested, in today’s dollars, billions of dollars into a steel industry ambition and did not vest specific leaders with the responsibility of making the investments work nor did they properly vet the investment. There is a reason for this. When a group of people reaches into the till to help themselves to money that belongs to their poor suffering people, they don’t want to leave any fingerprints. They know they are stealing. The steel mills never amounted to much because the people who were responsible for purchasing the project, were on the take! Their focus was not on the return on investment (ROI) for the people. The projects were never thoroughly vetted. Both of the major developments, Ajaokuta and Delta Steel Company wound down very quickly after their initial beginning and stayed shut for more than a decade. They were thrown together as if the results did not matter. No forensic analysis has been done to trace the path of the huge investment of the people’s time and treasury. The public deserved then (and still deserves now) to know why they failed. The shareholders of the projects, the people of Nigeria, were taken to the cleaners and led to believe that perpetrators are ghosts.