“How many African countries have done a market research of global consumption patterns in rich countries to find out what they are buying and from where they are buying it and, using the information, have formulated strategy to position their country to address a niche?”

In my soon to be published book, Unleashed: A New Paradigm of African Trade with the World, I have tendered a comprehensive argument for a paradigm shift in the manner in which African countries pursue economic development and relate to the global business and investment community, and in how the global business and investment community relates to African countries. Although the widely held belief that African countries are rich in raw materials is largely a phantom notion spread by western 17th and 18th century entrepreneurs in order to attract investments from their countrymen and women and to secure the patronage of monarchs, it is largely true that Africa—as a whole—reposes a fair but certainly not dominant share of the world’s endowment of earth-bound resources. The problem is that the segmentation of African countries into miniature countries through the partition plan of the “Berlin Conference,” of 1884-1885 has left a political and economic landscape that is, in many respects, an unviable mirage bereft of roots of concrete harmony or enviable resources.

The economically unwieldy and often politically lethal agglomeration is the causative precipitant of the many difficulties that have plagued many African countries since independence. As people scramble for perceived scarce resources, there is a zero sum struggle that invariable culminates in desperate action and measures. It was the reason for incessant Viking assault on England from the 4th through the 7th centuries; it was the reason for the Colonial war with American colonies; it was the direct cause of incessant wars that plagued medieval Europe; and a major cause of the two great wars, World War 1 and 2. In fact, the greed and scramble for resources caused Hitler to invade the Soviet Union in World War 2. It also led to Germany’s atrocities against the Harare peoples of present day Namibia. The foregoing clearly illuminates the truism that African states are not unique in the singularity of nations and peoples inclined to resorting to political expressions of violence as a medium of communication for the purpose of securing a larger share of available resources. The foregoing aside, Africans are becoming much more aware of the necessity of reasonable adjudication of differences and of the need to avoid armed conflicts at all costs as a way towards ensuring economic development and prosperity for all of their citizens. It is not perfect but it is a significant improvement over the recent history. It is also important to note that African countries repose vast potential as the workforce, energy source, and bread basket of the twenty-first century, in competition with the established centers in India and China. The key is for African countries to form a cooperative working arrangement with each other externally and internally, to promote progressive economic reform.

There is no question that if African countries as independent states, can evolve a more cooperative inclination and attitude in economic matters, including harmonizing production, labor, and markets across national boundaries, the continent can very rapidly evolve into a very important bloc in the global economy. The ingredients for this evolution are inherent in the resource composition of the continent: there is a growing and significant labor pool; proximity to western markets in Europe and America; vast arable land; natural sources of energy—especially Solar, Wind and Hydro; a natural inclination towards entrepreneurship in the people; vast expanse of beach front access; and natural and world historic icons in two major institutions of human history—slavery and colonialism. If, on the other hand, each country has to evolve on its own, the road is more challenging, but the opportunity for economic development and prosperity can be achieved, depending on the policies each government enacts.

Unlike the immediate post-independence era, the present generation of leaders of African countries has a unique opportunity to build their societies from scratch and to do so independent of external coercion. This process does not require a summit meeting or a convention of elders. It can start immediately by individual leaders making the conscious choice to follow a wise path, to be servant leaders of their flock whose sole agenda and purpose is working for the betterment of their society and people. There are precious few leaders in the history of independent African states that the statement can be applied to in its entirety. Unleashed: A New Paradigm of African Trade with the World seeks to engage policy makers to enact smart policies that will unleash the energies reposed in their people and in the existing business community. The road to success starts with having a success plan of action and the ability to execute the plan. How many African countries have done a market research of global consumption patterns in rich countries to find out what they are buying and from where they are buying it and, using the information, have formulated strategy to position their country to address a niche? That is exactly what South Korea had to do in order to put “headlights” on the economic growth vehicle they wanted to drive to prosperity. It is living by a higher call to duty and governing by way of wise counsel and wiser action.

It is important for African policy makers to discipline themselves to rely on homegrown resources, instead of aid from external sources, and the greatest of the homegrown resources is labor. A very wise course of action would be to take a page from China’s economic playbook and devise a strategy to use low-cost labor coupled with smart policies to entice businesses to bring factories, processes and ideas, to make things for re-export. In order to build a sustainable and lasting economic infrastructure, African countries will have to compete with other countries to “make” things that western consumers need or want. It is the surest and quickest path to economic development that is both sustainable and will also de-couple African countries from their attachment to raw commodities as the only source of hard currency. Every African country is inundated with excess—unengaged—labor and finds the torrent of future entrants growing, because of the youth population, which census figures have estimated as being the largest bloc of present and near-future Africans. And due to high unemployment and abundant supply, African countries can and should compete with their ability to supply low-cost labor. Every society has had to start at the point where they use their labor to make goods and services to meet the supply of where customers who can afford the goods are.

For African countries, having a young and growing labor pool is both a challenge and an opportunity. On the opportunity side of the ledger, finding a job for them is paramount consideration in any society that wants to have peace because a restive, idle, hopelessness-imbued youth population is the surest path to anarchy and disorder. The United States of America was once a low cost manufacturer in the pecking order of the global economic food chain. African leaders on the other hand, subconsciously communicate a desire to be recognized as being at the top, irrespective of where their country’s social economic performance places them in the pecking order. The challenge of desiring to be perceived as “rich and successful” means there is absolute “systemic blindness” to the reality of what must be done to become rich and successful. If you perceive yourself or country as being already rich and successful, what is the incentive to look for what you already have? It is an excuse to not turn over every rock. To wait for people to come to propose things, rather than proactively proposing what you have to offer to the world. Why are the poorest countries in the world not constantly knocking on everyone else’s door seeking work, opportunity and access? Why are they not telling the world to come and use their cheap labor to manufacture products for export back to their markets, like Singapore and China did in their struggle to develop and prosper? 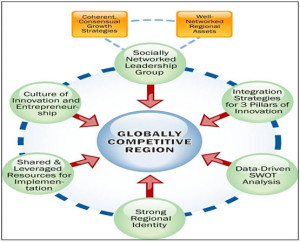 The best and surest form of work that African governments can attract is work that serves multiple purposes: (a) creates employment and income for people; (b) produces goods and services both for external trade and domestic consumption; (c) diversifies the income of the country; (d) introduces manufacturing and production knowledge in specific areas but also in tangential areas that supply the original entity. Promoting (manufacturing for export) industrial development is the easiest type of capital and entrepreneur to attract to African countries because the exportability of production creates a means of servicing any debt associated with enterprises created for the primary—although not exclusive—aim of manufacturing for export. Finally, any industrial arena is open to any and all African countries, both small and large alike, depending on how policy makers chose to craft incentives…to be continued in Part 2