China and African countries: A conundrum for Western Nations

“….The person who is spreading ‘disease’ cannot be trusted when they profess to have a cure for the same disease.” 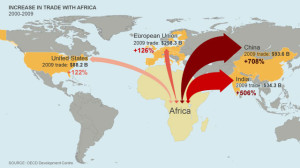 It is amazing how much hand wringing and consternation there has been in Western circles about the amount of business the Chinese are doing in African countries. That the volume of trade between China and African countries has grown significantly is without question. But there is no surreptitious reason for it. Rather, the Chinese have made proposals to African countries that they found very appealing. Their proposals and projects are meeting the customer where they are. Very few reasonable people contest the benefits of the infrastructure projects for African countries. A reappraisal of the context is therefore apropos. Bearing in mind that freedom dictates that a country, business, or entrepreneur that can afford it can go wherever they want to go and do business wherever they want. With respect to their activities in African countries, China is certainly doing that. It is a core belief system of Western military, business, and entrepreneurial culture. If that argument is insufficient, then one has to inquire as to the rationale that enabled Europeans to control so much of the world.

The other reason it is interesting is that Europeans, to whom the United States gave free reign to perambulate in African countries, have created an indefensible legacy for the Western alliance and its chief defender, the United States. The U.S. is suffering from the poor performance of Euro-capitalism in Africa from before the independence of African countries and through post-independence and the cold-war era. In virtually every African country during the colonial era, Europeans failed to make proper infrastructural investments. Investments that would have not only enabled them to derive better economic benefits from the colonies but would, simultaneously, have improved economic activity within the countries. Had they done it, they would have left African leaders better countries to manage at independence.

France, a key member of the Western alliance, has continued a charade of independence for its former colonies when in fact they control the purse strings of Francophone countries. The most important decisions about financial matters in Francophone countries of Africa are not made in the countries but rather in France and by the Finance Minister and Legislature. How can a country be independent if it doesn’t have the power to decide how to spend its money? Well, that is what France is doing in African countries and no one in the Western alliance has called them to task on it. I think that makes members of the alliance, at the very least, compliant co-conspirators and at worst, hypocrites.

As for the relationships China has built in Africa by helping to rectify Euro-originated economic maladies, it is quite appropriate to state that without the selfish inclination of European economic designs in Africa, China would not have found the wide, some would say, gaping opening it found. The fact is, there are very few natural affinities between China and African countries. Chinese language is a hurdle for most people and countries. There is the issue of communism. African people and countries do not naturally incline to communism. They have had many bad experiences with communism; most glaring is Zimbabwe but equally bad was Tanzania under Julius Nyerere. The Chinese, as well, have had many bad experiences with communism which is why they have adopted a lot of capitalist ways. No sane African person, who is informed, thinks communism is a good idea. So the issue is not about China. Rather, it is about how nations of the Western alliance have and continue to blow the chance to have a better, more equative, association with African countries. There remains an (18th century-style) exploitative-plunder mentality in Euro-conception of African countries. This attitude does not serve well the objective of promoting free enterprise and democracy in the countries. The person who is spreading “disease” cannot be trusted when they profess to have a cure for the same disease.